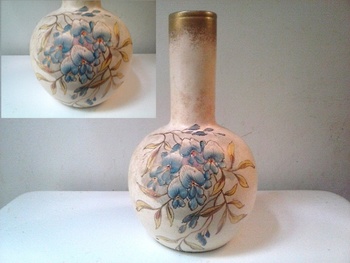 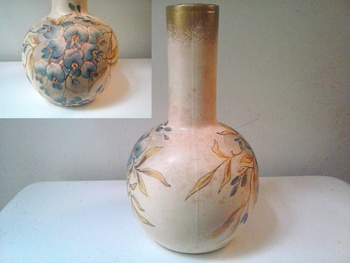 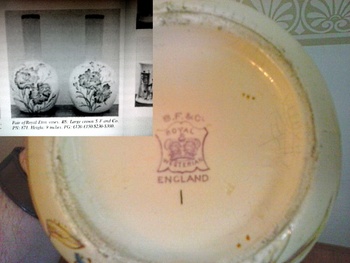 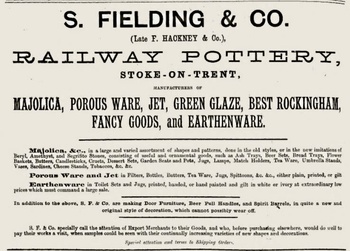 A quick dash to Salvation for half price Wednesday produced this lovely Wisteria hand painted floral and gilt vase. The beautiful flowers are just a bit different on each side. Actually I was in line with something else and the lady in front of me had her card declined. A big delay ensued while the cashier called the manager to void the sale so she could put back several items. So I decided to have a quick second sweep and bingo...I found this vase for $3.99 ! Not even half price and still what a bargain ! A lovely piece of Crown Devon Vellum pottery with an early S.Fielding. & Co. crown mark. It's known as Royal Wisterian produced around 1900. I also found a guide online to ID it. The Crown Devon Price and Identificaton Guide /The Original Crown Devon Guide from Francis Joseph by Ray Barker. Updated for 2014. This shape is on page 65 of the book as PN 871 but with a Royal Eaton decor. It's in beautiful condition for it's age a few nicks in the base but nothing that shows. -Mike-

Made by one of the more prominent Staffordshire makers of the day, S. Fielding & Co (That's the initials S.F.&.Co.) located on Sutherland Street, Stoke-on-Trent. In about 1913 they adopted the trade name "Crown Devon" producing a wide range of appealing and affordable art pottery for at least the next fifty years, which became well known and much collected. Fielding's came out with this design deliberately to compete with a successful, but much more expensive, pottery series being produced by Royal Worcester. Fielding's version compared quite well on quality, but was a fraction of the price of the Royal Worcester pieces, so it became highly popular. In 1929 the name "Fielding's" was dropped from the mark and they became simply "Crown Devon".