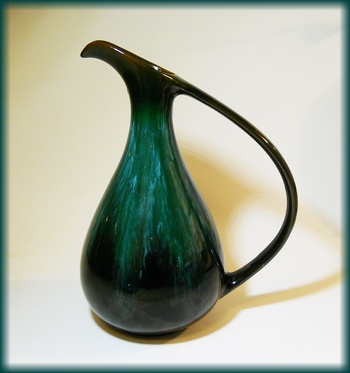 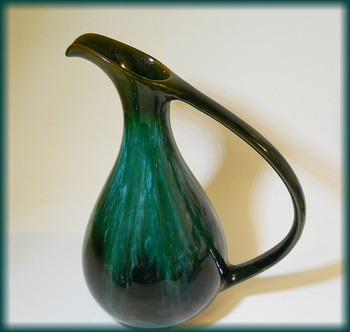 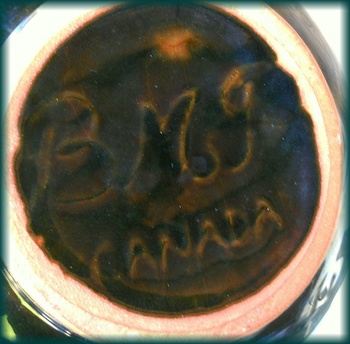 First of all ~ Sorry I have not been around as much. Just enjoying Summer here after a long winter....LOL.

Anyways, this is a Large BLUE MOUNTAIN POTTERY EWER / PITCHER with one of the older marks on the bottom. So this is a very early piece. The Ewers like this with the three trees on it for a mark would be around 1980's or so. THIS ONE HERE with this mark is from around 1950's era.

Blue Mountain Pottery closed down in 2004 here in Canada. The death of an era now gone by.

""Blue Mountain Pottery began in the early 1950s, likely 1953, and continued to produce its wares until 2004, terminating business in February 2005. During this time it grew from a small localized operation based at the Blue Mountain ski resort just outside Collingwood into a major factory exporting to the United States, British Isles, Caribbean, Australasia and other markets.

Items made over this period can be identified by studying the diverse methods of marking the pottery using different ink stamps, mould marks, stickers, hangtags and glazes. Blue Mountain Pottery is best known in the traditional green glaze, a flowing drip glaze that made each piece a distinctive individual work of art. However, as many as thirty to forty other glazes may have been employed at various times in the company's history including various hues of blue, red, mocha, slate, yellow/brown ("harvest gold"), white, black and many, many more.

During the years of operation two men came to be virtually synonymous with Blue Mountain Pottery due to the extent of their involvement over many years as well as their business leadership. Jozo Weider was the first owner and would play a major role in various capacities until his tragic death in October, 1970. Robert Blair was the other major influence, serving as a corporate leader from about 1971-1983, retiring, and then returning with the purchase of the bankrupt company's name, logo, and many moulds in November 1986. He would own, rebuild and operate Blue Mountain Pottery until the end.

Many talented potters worked for the company over the years. Perhaps the best-known were Dennis Tupy, a highly skilled mould maker who was the originator of the style and who worked at BMP from its origins until 1960, Dominic Stanzione, the studio potter whose work helped to make the company famous in the late 1960s-early 1970s, and David Bennett, the creator of the ROMAR and Robert Wilson special editions and whose time with the company ran from the mid-1980s until its closure.

Sadly for collectors Blue Mountain Pottery closed its doors on December 31, 2004. It was the end of an era for a business that was effectively a Canadian icon and one of the largest potteries ever in Canada. ""