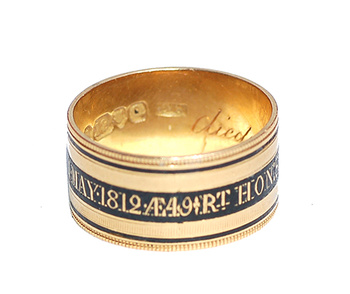 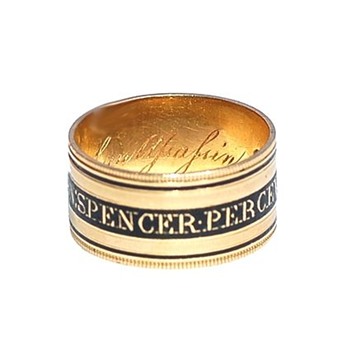 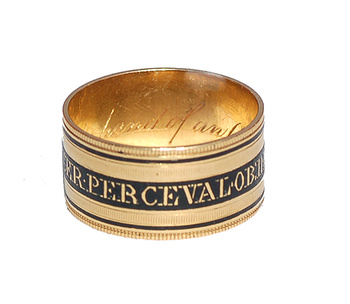 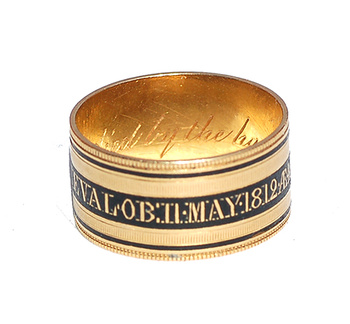 A high-carat gold mourning ring, with a flat, wide hoop, the inscription in gold letters on band of black enamel between ribbed bands and narrow bands of black enamel: Rt Hon Spencer Perceval Ob May 11 1812 Aet 49, and engraved inscription to interior: Died by the hand of an assassin. The band is 1/3 of an inch wide. To interior British hallmarks for 1812 (sovereign's head, leopard's head, crown, carat number 18) and maker's mark for Samuel Glover, Foster Lane, London.

Spencer Perceval, a lawyer from an aristocratic family, was the only British Prime Minister assassinated while in office. Upon entering the House of Commons on May 11th, Perceval was accosted by John Bellingham, who drew out a pistol and shot the Prime Minister in the chest. He fell to the ground, crying out, 'I am murdered!'. His assassin was a British businessman who had been falsely imprisoned for debt in Russia. He harbored great resentment as the British Embassy had failed to assist him. Spencer Perceval's widow was expecting their 20th child (yikes!) when he was murdered and she received an annuity of £1000 per annum. Trust funds of £50,000 each were set up for their 12 surviving children. The government took the view that 'his children are his country's', hence the large sum.

For similar rings, see the Victoria and Albert, Fitzwilliam and British Museum collections.