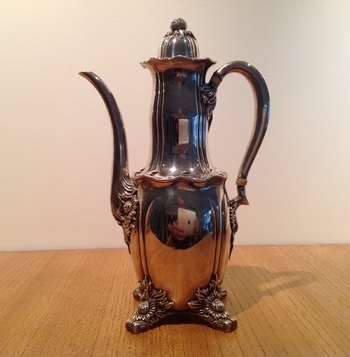 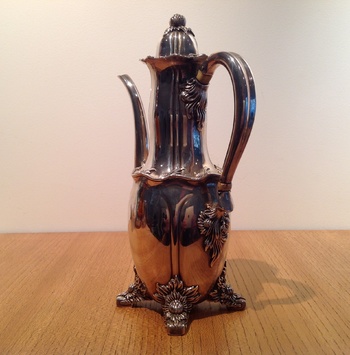 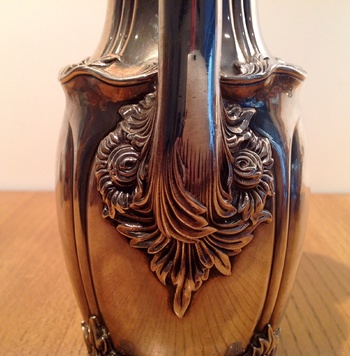 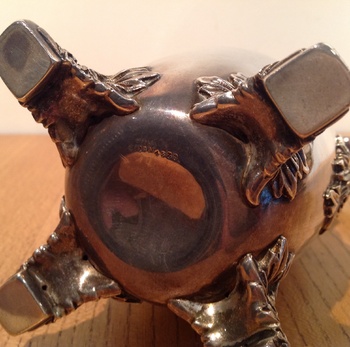 Another object that I have looked after now for thirty years.

It was found in an antique market west of Sydney,Australia. To my eye it was different to the usual Victorian plate that surrounded it in a cabinet. I asked to have a look and saw the Tiffany stamp. It was not cheap but was priced as a piece of electroplate.

American silver is not usually found in Australia. Most of the silver seen here was imported from Great Britain during the Victorian era. There was some production of silver here in Australia by convict artisans, but it is extremely rare and of course very collectable & expensive.

I am sure that there were other pieces brought to these shores from the US, but as yet I have not been able to track them down here in Australia.

A fortnight after I bought the pot I came across a copy of Tiffany Silver by the Carpenters in a remaindered bookshop.

It is part of the Chrysanthemum pattern which was introduced in 1880 and is said to have been designed by Charles T Grosjean.

The Chrysanthemum pattern books were well used and many objects were made for it. In the Carpenter book there is mention of the Mackay Service in this pattern that comprised 1,250 pieces and was said to have cost $125,000 in 1878 when it was delivered to the lucky tycoon's wife Marie Louise Mackay in Paris. It was displayed at the American Pavilion in Paris that year and quickly established itself as being the epitome of the sumptuous dining table of Victorian America.

It's possible that my pot was ordered after an Australian visitor saw the Mackay set in Paris at this important World's Fair. Fantasy?

Over the years I have also come across a design that is similar to the silver pot. It is a very famous design by Royal Copenhagen called The Full Lace Blue Fluted. It dates to c. 1770. The forms of the coffee pots in this service seem to my eye to be the basis for Grosjean's design. This is just my theory.... I have no proof at all.