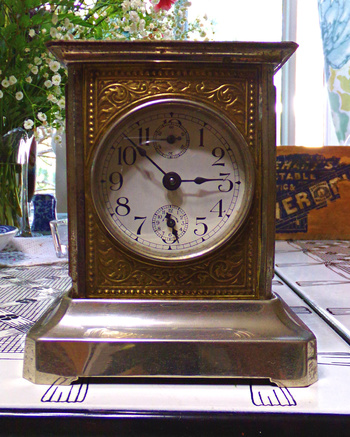 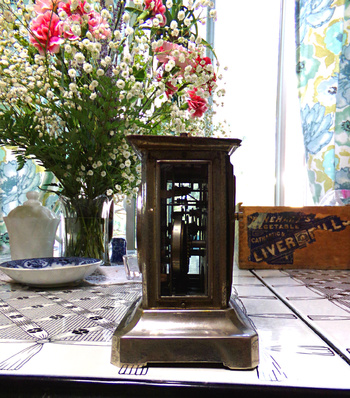 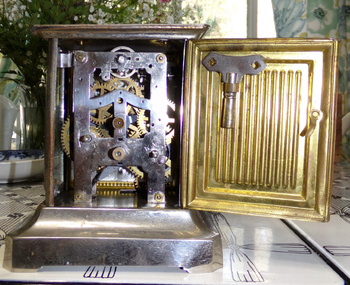 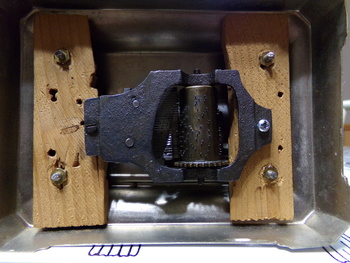 Here's a clock I picked up before the auction I've been posting from. It's a German musical alarm carriage clock, probably from around 1910. I got it super cheap, probably because it was missing a panel. I happened to have another German musical clock, which didn't work; and, since they all have the same construction (generally), I stole its panel and put it on this more ornate, more functional model. I also ended up switching out the music boxes, as the box in this one had broken a tine; and, apparently, the times were not interchangeable among themselves. It was a sort of 'dream clock' of mine.
When I had sat down to work on the clock, I took off the bottom as it has a wood panel (from what I could determine, it had traveled to a few countries as their names were written on the bottom) and sat it down when I saw a stink-bug sitting on the musical mechanism. As it was alive, I took it outside and let it free. I went back to the clock and worked on it a bit (thus discovering the broken tine problem) when I accidentally bumped the wooden panel on the base. Having half knocked it off the stand, I picked it up and flipped it over-- thus discovering another 5 living stink-bugs! Yuck!

As another interesting note, as I typed the title into the box for this post, a bunch of former titles I'd type for posts in my BlackBoard college web-page discussion post area popped up. Are the sites related?