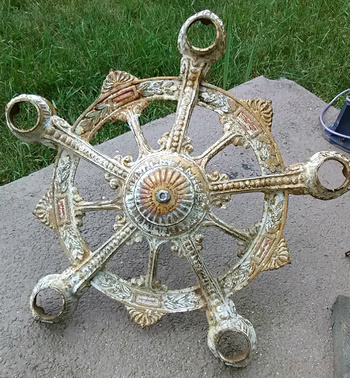 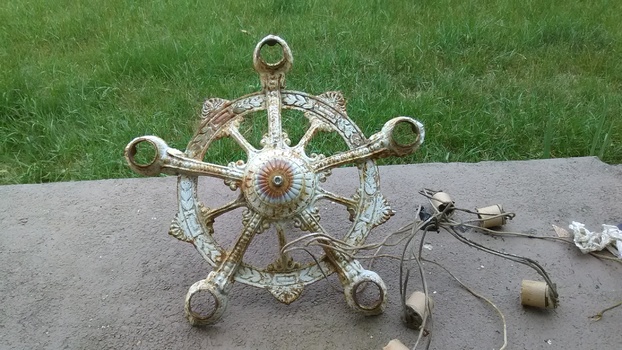 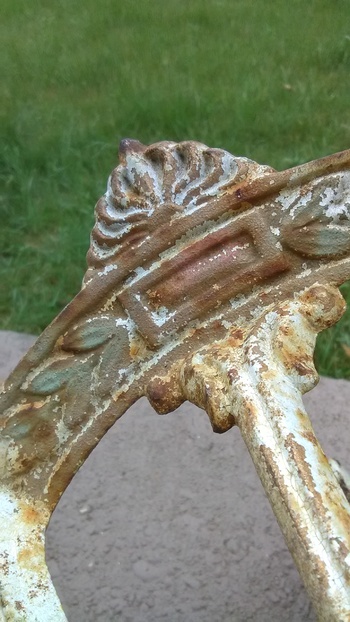 Today I went to re-fuel my car and decided to go to a charity shop and thrift store on the same road. Normally, I don't go to them, because they are usually over-priced and full of junk; but today I think I did really well. Though I don't normally spend so much on a single item (12 dollars!), when I saw this early 1900s cast iron chandelier with original fabric-wrapped wiring, I knew I had to buy it (because where else will you find one for 12 dollars?)
It was painted all white, but enough of it had deteriorated that, when I began cleaning it at home, I realised it had the colours of seafoam green, coral red, gold, and copper under the rust- and creamy-white paint. So, I carefully wire-brushed and sanded some of it off to see exactly what it looked like in the '20s.
So, this will probably be my next refinishing project. I have the right enamel paints to restore it to original, but I'll have to get some new sockets and order some new fabric-wrapped cord.
My mom has, for some time, wanted a chandelier in her bedroom. I was so glad when she seemed to fall in love with this one. ;)
The sockets are made by the J. Paulding Company. I found one reference to it in a 1916 document, another in 1922, another in 1931, another in 1947, another in 1961, and information saying they closed their doors in the 1980s. A source said they were making Bakelite sockets in the 1940s, so, since these are porcelain sockets, we can reasonably conclude they are pre-WW2. Because the sockets have white paint inside, and the cords have white paint on them, we can reasonably conclude that they. too, are original to the chandelier-- meaning that someone had this hanging for about 100 years! While I'd like to re-use the old sockets, I cannot get the wires out as they've been glued in.