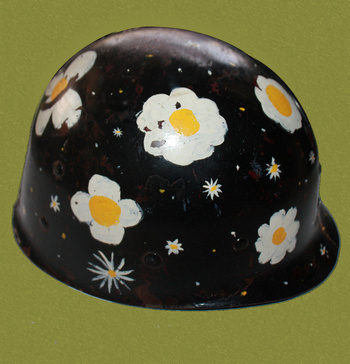 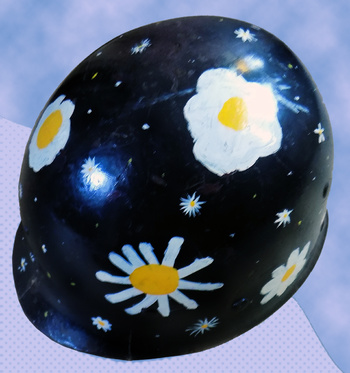 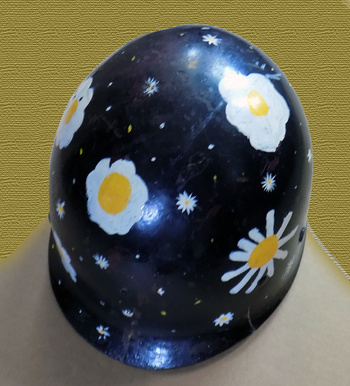 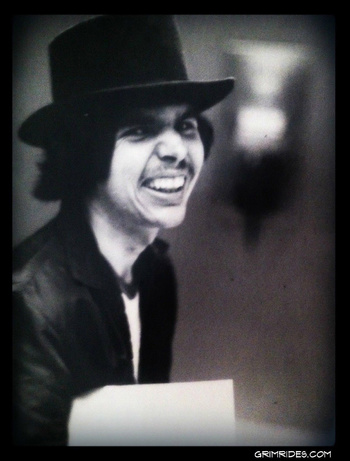 Many of these I see for sale are later incarnations made by someone's impression of what they think these should look like. Here, I have an authentic 1960's UCLA Student Hippie Folk Art Protest Painted Helmet acquired from his daughter. I know his name and even have an image of what he looked like, which is rare indeed. I love not only the flowers even though some make me want to eat even more eggs... but the little specks of color he added to the helmet between them. Never seen that technique before.

She graciously supplied his bio:

<Her> father (RIP) was a VW driving Hippie in the Sixties and painted this and wore it to Anti-War Protests all over California back in the day. He wore this to one at his college UCLA? And got kicked out. (He was later readmitted) He went on to become a lawyer to bring about positive change.

Dad, John Sh*****lt was a native Californian,
born in Orange County and later moving to Northern CA, and
then Central CA.

His brother attended UC Berkeley, and his favorite cousin
lived in Oakland, CA so I know he went to (Protest) rallies up there
as well as in Southern CA.

He loved Cars. Primarily German ones and early Fords. I grew up
in a VW Bus, which we drove all the way across country and back
multiple times over the years.

Having grown up in Southern CA & loving cars, he knew Ed Big Daddy Roth
and Von Dutch, and I got to meet them when I was very young.

<Her> father enjoyed painting, I remember one in particular, it
was a spoof of the Sherwin Williams Paint Company Logo,
but instead of a paint can, it was a planet that looked like a skull
getting covered in Red Goo. He also enjoyed making Sculptures,
especially Black Light ones.