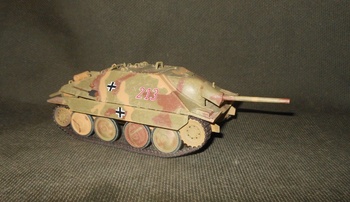 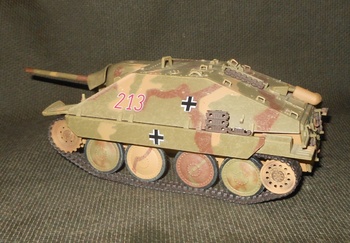 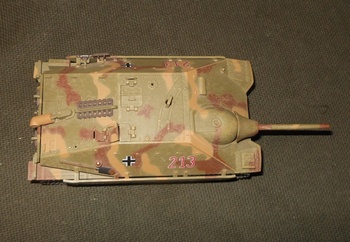 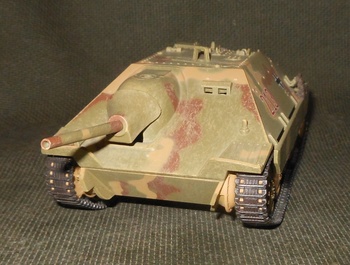 But don't all it a hetzer call it a Jagdpanzer 38 because Hetzer was the name of the prototype and I am not sure why you can't call it a Hetzer or the tank forum people will flame you. Also don't call it a tank it is a tank destroyer because it has no turret even though there are other vehicles just like it that are tanks. Personally I think it is OK to call all the various tank-like vehicles tanks since they all end up doing the same job.
As for the subject of this post it is not a model. It was sold fully assembled and painted. It looks and feels like a model but it is a bit more durable and a bit cheaper. My one complaint is that they didn't make it in 1:35th scale instead of 1;32. All the model makers use 1:35th aside from some throwbacks from 1960s. Still it is very nice and for $4 I can live with that. Imay pick up a few more if I can get them at a good price.
As for the actual vehicle it was built by Germany in WWII on Czech tank chassis the 38(t). It had good sloped armor and a decent gun. But it was rather cramped. Imagine four men working inside the space of a mid sized car with an artillery gun taking up the right side. A VW bug probably had more space. These were purchased by the Swiss after WWII. Saw one at an air show for sale, it was rather nice. 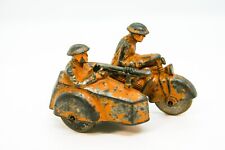 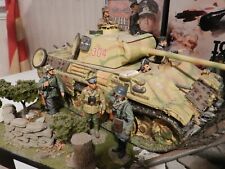 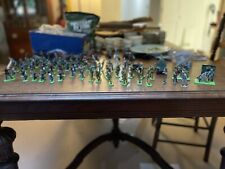 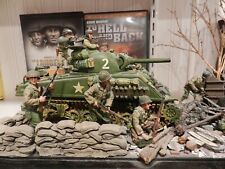