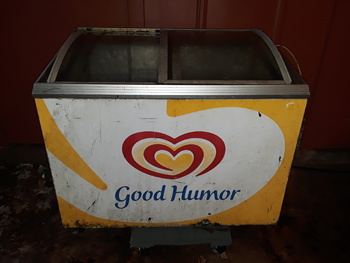 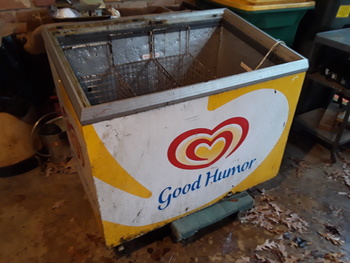 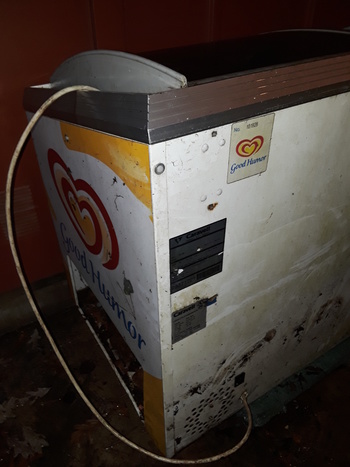 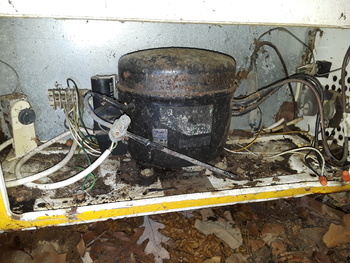 One of the perils of driving a pickup truck is dealing with the constant risk of "assorted (sometimes large) things" that occasionally fall into the back of it, at random (often totally unexpected) moments. Here's today's such "thing". ;-) :-)

Spotted curbside in my neighborhood yesterday evening (somebody's cleaning out a rent house) I glanced at it and thought "hmmm...an ice cream freezer? looks dirty, and heavy, and I don't need an ice cream freezer" as I continued on home. Then after having mostly forgotten about it, I was genuinely surprised when it was still sitting there this morning (last nite's rain must have kept the usual scrappers away?) so I did look a little closer at it while turning the corner -- but it was *still* pouring rain, so I didn't stop then either. Told myself "well, maybe if its still there by lunchtime, and if it isn't raining so hard then...?"

And it was (still there) and wasn't (raining so hard) so CRAP... I stopped, got out, looked a little closer to confirm it was what it seemed to be (and also looked like it was all there) then dumped a few gallons of dirty rainwater outta the thing while wrestling it up into the back of the truck. Now here it is, sitting in my carport... <groan><lol>

It is what it looks like it is -- a GOOD HUMOR ICE CREAM freezer -- probably pretty much just like thousands more out in the world in c-stores/etc stocked full of various pre-packaged ice cream treats, sitting somewhere near the checkout counter so's to tempt customers into an 'impulse buy' on their way to pay for something else. Unlike those thousands more though, this one has probably spent its most recent years sitting somewhere semi-outside instead... <groan, again>

It is a little over 3' high and 2' deep, about 3-1/2' wide. GOOD HUMOR logo on its front and sides, with curved clear plastic sliding doors on its top. 3 wire basket racks are rusty but remain inside. All its compressor/mechanical parts *appear* to also still be intact in their compartment in the bottom RH side. Its manufacturer's labels plus a GOOD HUMOR property# (?) label are still on its backside, suggesting (if I'm guessing how to interpret the maker's data correctly) it might have been made in 1999. And YES -- it is just a wee bit on the heavy side (esp being fully waterlogged) as I nearly dropped it twice (and probably bruised my leg in process) while loading the stupid thing up by myself... NO idea yet if it still *works*, but there's nothing obvious to suggest it won't at least *try* to, once it gets some much needed de-grunging and closer inspection...?

AND FOR THE RECORD, I STILL DON'T have the slightest idea what the h*ll I'm gonna DO with an ice cream vendor freezer, whether it cleans up/works or not...?? <sigh><headdesk>