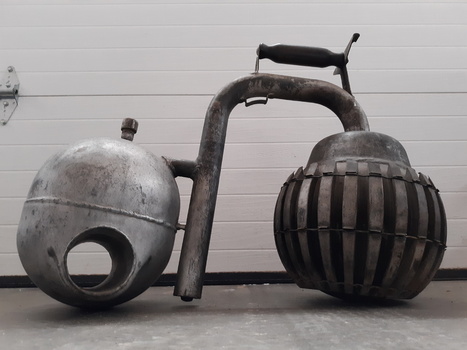 I recently purchased this Crosley Icyball at an antique store in St. Paul, MN. It is an early example of gas absorption refrigeration. Patent applied for in 1927. The balls were charged with a mixture of water and ammonia. The unit came with a kerosene heater, a pail for cold water and a chest type cooler. Heating the hot ball for 90 minutes at low heat would vaporize the ammonia but not the water. The ammonia would pass as a vapor to the cold ball which was immersed in cold water. There it would condense to a liquid again. Aftcr charging it was placed with the cold ball in the cooler and the hot ball hanging on the outside. As the ammonia vaporizes and returns to the hot ball where it is absorbed by the water it freezes the cold ball in the cooler. Ammonia boiling point is -28 degrees farenheit. The hole in the cold ball is for an icecube tray. It would need to be charged once a day. Now I get to try to find the cooler, pail and icecube tray. icontent://com.sec.android.app.sbrowser/readinglist/12