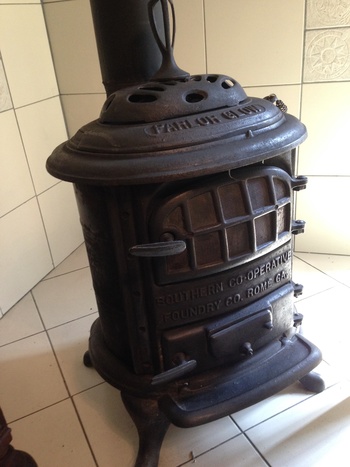 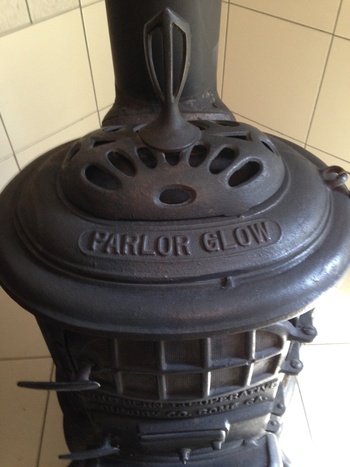 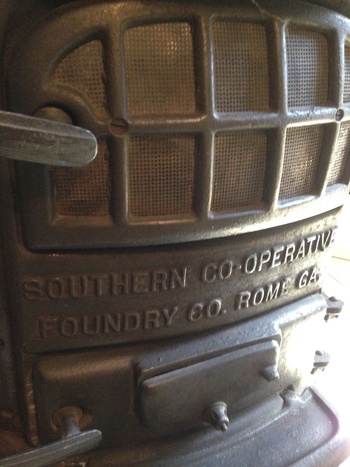 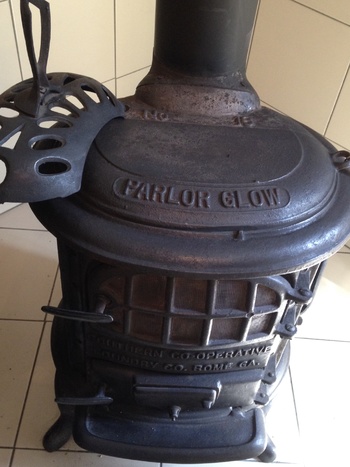 This cast iron wood stove was made by the Southern Co-Operative Foundry Company of Rome, Georgia.

My father bought it in the late 1960s to heat part of our house. He used it for 20 years, then gave it to me when he upgraded to a much larger one.
It’s been used in 2 different houses of mine throughout my son’s childhood,; now my grandson has laid claim to it for his house, whenever he gets one.....that will make 4 generations of my family who have enjoyed using this charming parlor stove.
It’s been well cared for and has all of it’s original parts.
The pretty finial on top swivels to the side or can be easily removed and laid aside if you choose to cook food on the top surface.
You can load wood into the stove from the top or from the door on the front.
The window in the door let’s the red glow of the fire show thru, true to the name, “Parlor Glow”.

When my grandsons were small, they thought it was great fun to get to start a fire in it then put a skillet on top to make grilled cheese sandwiches!

The Southern Co-Operative Foundry Co. was in business from 1898 until 1970, making stoves, ranges, grates, and hollow ware.
In the early days of the company, it was one of 4 different foundaries in the town of Rome.
In researching the history of the company, I read that it became very hard to hire enough men willing to do the hard, dangerous work in the sweltering heat of an iron furnace.
I can certainly understand that the job would not have much appeal.

I appreciate all comments! Thanks for reading!