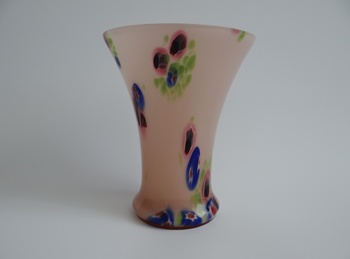 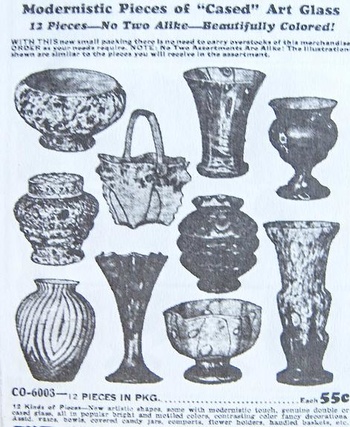 I think this is another vase produced by Ernst Steinwald & Co. So far, this decor and shape has been attributed to the Wilhelm Kralik glassworks. In my opinion, the shape corresponds to the shape from the advertisement of the Steinwald glassworks on Osiris glass (see photo 3), and is also similar to the shape from the advertisement (photo 2) of this glassworks in the Kur- und Badestadt Teplitz-Schönau publication from 1930 (see: https://www.collectorsweekly.com/stories/283784-ernst-steinwald?in=442-activityBohe). Shapes from this advertisement also appear in Buttler's catalog from the 1930s (photo 4). I think it is glass produced by Ernst Steinwald & Co. and not Wilhelm Kralik, as is still generally attributed.
The decor of the vase - referred to as "millefiori" - could be decor 2323 (or very similar ??), which appears in the catalog of lamp shades of the glassworks of Ernst Steinwald & Co. from 1930 - see: https://www.collectorsweekly.com/stories/284647-ernst-steinwald-and-kralik-dcors?in=442-activity
The vase has a semicircular marking Czechoslovakia at the bottom.