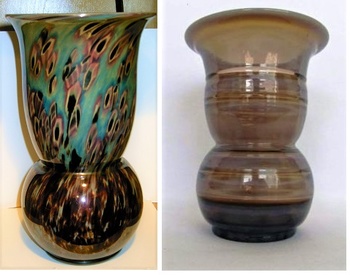 Ernst Steinwald factory Produced a line of glass called Osiris seen here in a German advertising. CW member Ales introduced this ad (seen in pic 4) it sheds light on shapes and decors produced by them that were thought to be make by Wilhelm Kralik. This is not to say that all decors seen here were only made by them. It is especially important to realize that comparing generic shapes, like the ball vase are hard to perfectly match. You could also say that that companies competed with decors and the picture only shows vertical lines and Kralik could have produced the horizontal ones. This link below shows Osiris also did horizontal lines, it also shows marks associated with Kralik and Ernst Steinwald -both!

P.S. I own the the four shapes and they are consistent in size as well (the planter shape is huge)