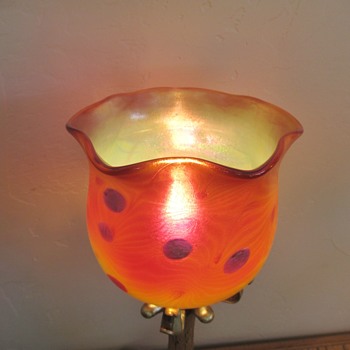 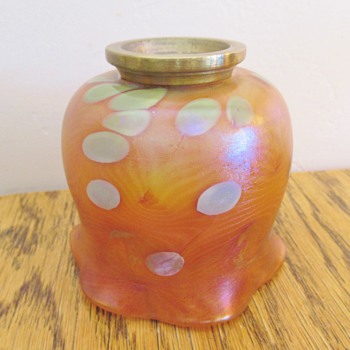 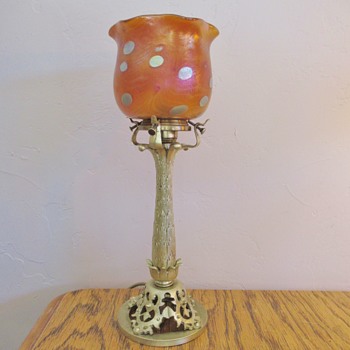 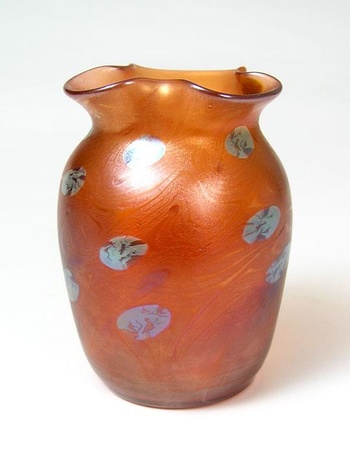 I could use some assistance from you more experienced Loetz collectors! I bought this pretty bronze/brass lamp made by H. Luppens & Cie., a foundry based in Brussels during the 19th c. The ornate lamp has the Luppens circular mark on the base. Luppens was known to collaborate with some high end artists and produced some beautiful works, mostly in bronze. They also produced some very intricate gilded bronze mantel sets, clocks, lamps, etc.

This lamp came with a shade attributed to Loetz. It has a rather unusual brass fitter. The shade is iridescent and has a reddish glow. It has silver spots on it and clear threads that are pulled up and down irregularly. The interior has an iridescent layer of silver and the shade has 6 ruffles. The dimensions are 4" tall by 4" wide. Because this has the brass fitter, the shade does not have the usual rim. It is cut off and has a clean 1.5" hole.

The ornate stem of the lamp mimics the scales on the trunk of a Palm tree and the arabesque cut outs on the base are very middle eastern. When lit up, the spots produce a brown pattern, possibly to evoke coconuts. In addition to Brussels and Paris, H. Luppens had businesses in Cairo, Egypt and based on this, I believe this lamp was made for that market.

Update: Andy provided me with a photo of a vase in the same unknown decor.