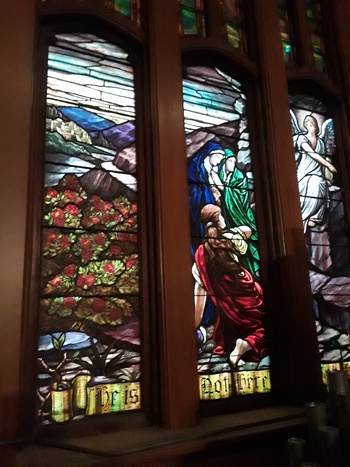 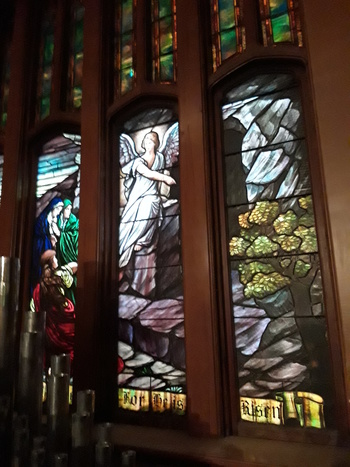 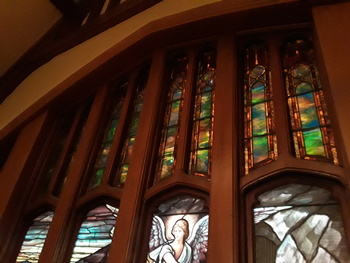 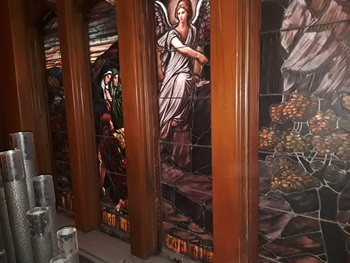 NOT MINE except for the photos -- these windows adorn the front chancel wall of First United Methodist Church of Hot Springs (National Park) AR and along with their building probably date to about 1924, when the congregation was likely known by a slightly different name. I don't have a clue who originally made them.

What's kinda unique in my pics here is the perspective -- there is now a pipe organ variously set up in front of these windows (a few pipes of which snuck into the pics too...nothing that can now normally be seen, note also the way dusty windowsills) that only came along to there in 1973 or so (replacing a former instrument that might have been more kind to the view of the window from the sanctuary floor below, but I don't know that?) which has ever since largely blocked the congregation's view of the mostest bestest lower parts of them -- my pics today are while I was otherwise up there crawling around and tuning said pipe organ, so I *could* see/snap pics of them.

The theme is basically 'the resurrection of the Christ', in images and words below. I'm nobody's theologian so will leave the rest of the interpretation to others -- it/they are spectacular works of stained glass art IMHO, anyways about it.

One more interesting (?) observation...the folks that do really go to church there every week have sorta got used to not seeing most of the glory of these windows -- that part has slightly changed since the covid-virus and all has led them to do largely "TV church" (or internet or whatever) instead, where their main camera is set up in a back balcony that *does* provide an unusual (to those used to sitting in the pews on the floor downstairs) view (not as good as mine here) of these very same windows....there are rumors that one or two of those people have re-noticed what they've been missing because of that, and might be willing to pull out their checkbooks to "rearrange" the organ one more time...??? ;-) :-)