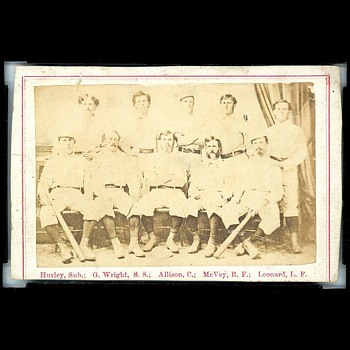 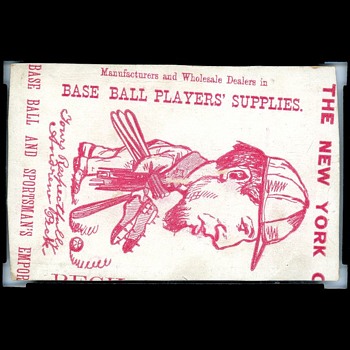 For my first post of 2021, I wanted it to be very special. Surprise, it’s not a camera! The baseball memorabilia shown here is a holiday present from my second oldest son whom I share a passion for baseball; the game and sports cards. He planned this a long time and knocked it out of the park. (Yeah. I had to say it!)

As background, baseball and photography have historically been intertwined a very long time. For example, years back on Show & Tell I posted an innovative 1883 camera with research leading me to attribute it being built purposely to take pictures of baseball. (Refer to my Pearsall Compact Camera post.) Baseball photography also gives us an unblemished, journalistic look at early players.

Even though photography predates baseball, in my opinion the historic importance of its contribution to the game, past and present, is embodied in the 1869 photographic card of the Cincinnati Red Stockings published by Peck & Snyder, a sporting goods company based in New York. The card is considered an icon of the collector community because it sits squarely in the crossroads of being the first true “baseball” card that also chronicles the birth of professional baseball.

For me, this authenticated 1869 Peck & Snyder card is a once-in-a-lifetime cross-collectable. They are rare and only a handful exist. The designation as the first baseball card is conferred as it features the first professional (paid to play) team. Even though the sporting goods company issued an 1868 card of the Brooklyn Atlantics, that team was not a professional squad.

Of interest, the Cincinnati team was undefeated and ended their season with a perfect 57-0 record!

This example is the smaller of two published sizes. The photographic image is light and the card was probably trimmed for a CdV album (not uncommon). The front has a mounted photo of the 1869 Cincinnati Red Stockings team while the back features an advertisement for Peck & Snyder.

Even though there are better examples yet given the overall rarity, any condition version is a welcome addition to my collection.