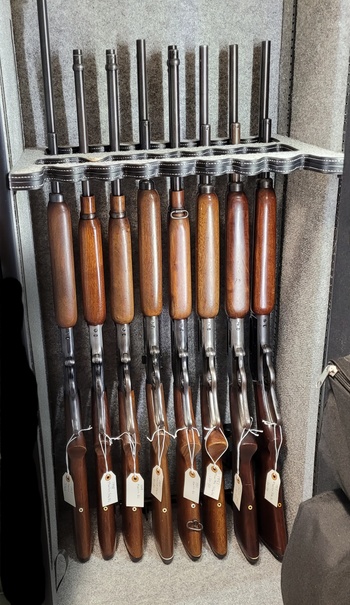 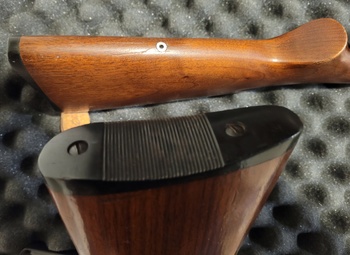 These guns are old and have a few nicks and dings here and there. They were made to be carried through the woods and used for hunting. A lot of soldiers fresh from the war bought these rifles and were able to enjoy their freedom at last.

The 1948-52 waffle tops also featured Ballard rifling. In 1953 the rifling was replaced with the microgroove rifling. Microgroove was cheaper and easier to manufacture. Microgroove barrels are rifled by forcing a carbide button through the bore, cutting or ironing out the grooves.

The 336A features a 24" barrel and has a hooded front sight. The 336RC (regular carbine) has a 20" barrel. Marlin made a few variations such as the 336SC(sport carbine) which has a shorter magazine tube vs the RC that has a magazine tube that is the same length as the barrel. The difference can be seen in my safe pictures.

Both rifles pictured are the first year of the 336 and have the early style butt pad. Also note the small white dot...that is referred to as the Marlin Bullseye. Many think this is a sling mount, it is NOT! Some expert say the Marlin bullseye helps a buyer recognize a Marlin while in the gun rack at the gun store.

The marlin rifles featured a solid-top receiver made of forged steel and incorporated side ejection of fired cartridges.