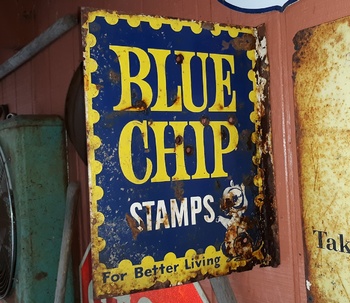 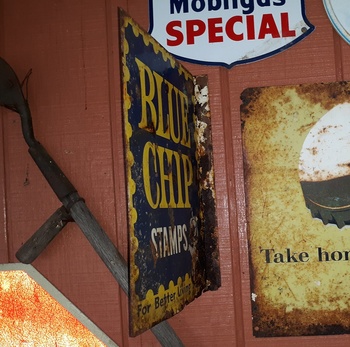 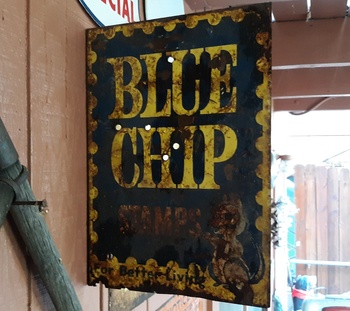 Not sure when Blue Chip Stamps ceased to be. I thought they were gone in the 1970s but apparently they lasted longer than that. I recall as a kid putting the Blue Stamps in books and going to the Blue Chip Stamps redemption store but don't recall getting anything. My brother got a GI Joe I do recall.
This sign is 15" x 11" and is a flanged sign. I like flange sign as they literally stand out. Instead of going flat against a wall there is about a one inch strip that gets attached to the wall while the the rest of the sign sticks out. It is double sided so it can be seen from both sides. This would obviously attract buyers who want to fill up their Blue Chip Stamps books.
There is a fair amount of attractive rust on this sign. One one side the chipmunk is barely visible but fairly clear on the other. It also has attractive bullet holes, looks like .30 or .38/9mm.
I can tell these flange signs were fairly effective as it is the most notable sign I see when I arrive home. Which to wrap this up is where I live.