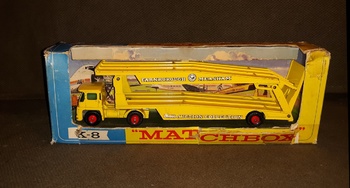 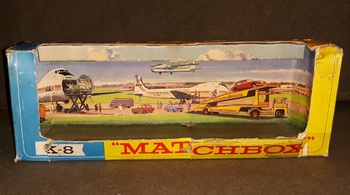 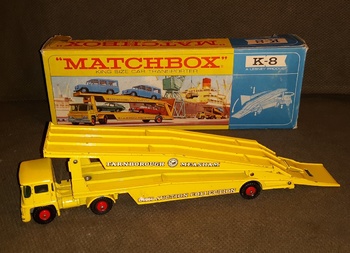 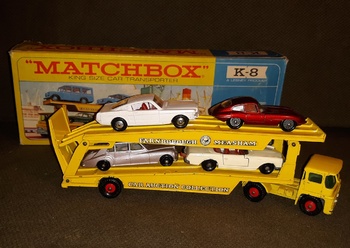 Here is a version of a Matchbox Car Transporter I have not posted yet. I have posted 2 other versions of this, one was the the Major Pack with a different paint scheme and the other the Gift Set which came with four Matchbox cars to carry. This one is just the car carrier by itself in the 1968 packaging.
The model is of the Guy Warrior car transporter. Don't know if the actual one only carried four vehicles. But that is plenty for play value. The top lowers to load the top. then it is raised the the bottom level filled. Next the ramp is raised and the car transporter ready to roll.
The box here is the 1968 version, although I think there is a possibility it is from 1967. It has the interior artwork that I think make these the best. The 1969 version has plain blue interior. I like those front loading prop planes being loaded with cars. The back has freighter, not sure they are being loaded or unloaded. It also shows how the model moves and how the ramps work.
Next week may possibly be a compendium of car carriers.