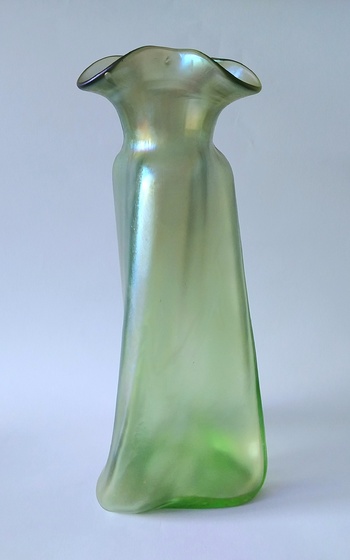 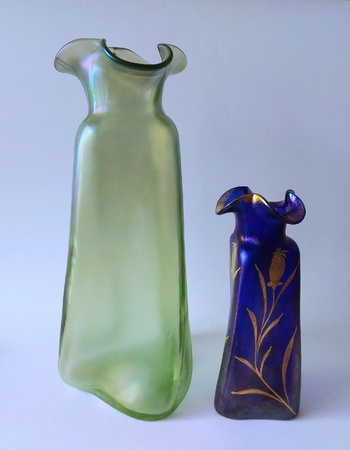 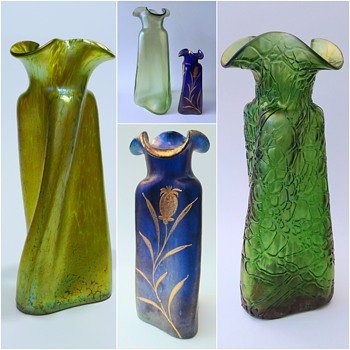 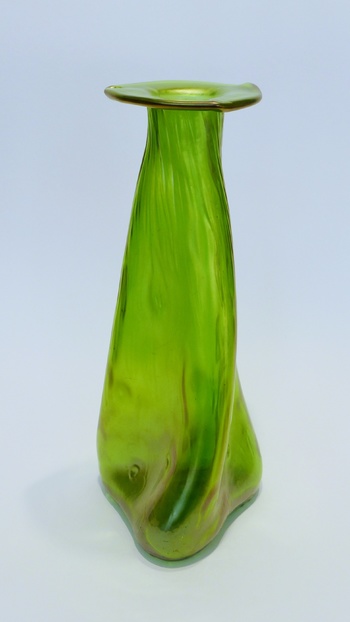 The vase shown here in the "Olympia" decor has a size of 40 cm and is therefore one of the largest vases in this shape.
These vases were made for W. Wehle Dresden and the French market in the following decors: "Creta", "Rubin", "Creta Papillon", "Blau Papillon", "Pampas", "Merkur", "Blau Iris", "Formosa" "and" Green Chine ". I also saw them in decors that are not mentioned on the pattern: "Rosa Chine", "Martele", "PG 4", "Ozon Cisele" and, as shown here, in "Olympia" and "Blue Cisele" .
From 1898 there is the same pattern in PN I 7302, with the decors "Papillon", "Creta Chine" and "Merkur".
The three vases shown in the photo are "Creta Papillon" H. 24 cm, "Blue Cisele" 25 cm and "Green Chine" 28 cm.
This form is often attributed to Christopher Dressler, which is probably not correct. On the photos you can see a vase based on the Dressler design in "Creta Rusticana" (33 cm), PN 346/668 and now PN II 225. This Dressler design was originally from "Clutha Glass" by James Couper & Sons in 1885 Glasgow manufactured. This vase for "Clutha" was a bit more elegant and had a slightly stronger twist (see "Lötz" (Ricke) page 20, illustration no. 10). Like several other forms designed by Dressler, the design came to Klostermühle via the Max Emanuel and Co. company in London.
A similar vase shape with a spun zigzag thread can be seen in these photos, this was very likely the model for the decor "Schnuerl" PN II 226. Furthermore, all shapes in the two photos were taken from the Loetz company.
During this time, the Loetz company produced several other designs with twisted walls, e.g. PN II 325, 326 and 329.