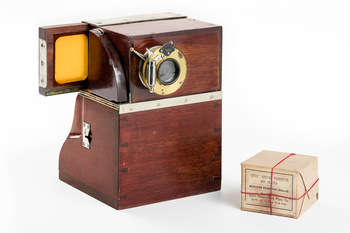 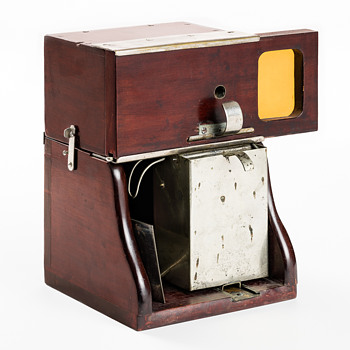 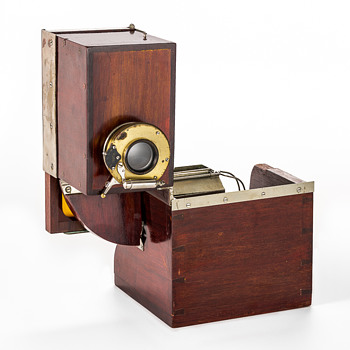 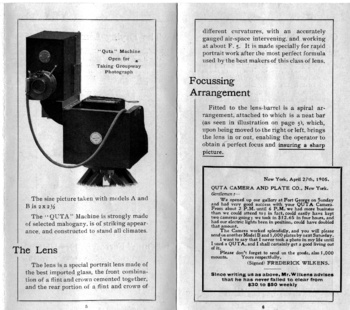 I'm reposting the "Quta Photo Machine" tintype camera because another camera collector (Mike) gifted me a special accessory and I wanted to share it. (Then again, my photography over the past 10 years has improved and this camera deserved a reshoot!) A couple months back Mike sent an email asking for my address. About a week later a small parcel shows up and inside was a true surprise; an incredibly rare, unopened box of Quta branded ferrotype plates! Of course I called Mike to thank him. Amazingly, he found and acquired another example of this rare camera (there aren't many) and it came with a couple boxes of plates! Mike felt I should have a box for my camera. In over 30+ years of collecting, I've always been impressed with the camaraderie, generousity and helpfulness in the camera collector community. This is one such example.

About the Quta Photo Machine ... back in 2004 I bid live (by phone) in an Austrian auction of photography equipment and won. The camera is relatively unknown, quite rare, and fit one of my collecting themes to acquire creative American designs. Let's face it, the camera name is as strange at its design.

A c.1906 advertisement claims it; "Produces a complete picture in frame in less than a minute." Does this marketing slogan sound familiar? Maybe more than you think. A little over forty years before Edwin Land's landmark announcement of the Polaroid camera that made "A Finished Picture in 60 Seconds," a new style of camera--a tintype street camera--was changing how people perceived and accepted photography.

For a rapidly growing group of itinerant photographers, gallery quality images were not the desired goal. Instead, the objective was to make money by making pictures. The allure and excitement of being handed an image a minute after the picture was taken, regardless of the image quality, kept people coming back for more. (Refer to testimonial in 1905 reference: image #4.)

Prospective Quta owners were also enticed by advertisements claiming that the camera's portable size was ideal "for use at the seaside and other places of public resort, such as Fairs, Summer Resorts, Excursions, Lawn Parties, Exhibitions, Bazaars, etc." As far as operational simplicity; "A child can learn to operate it in two lessons, no previous knowledge whatever of photography being required."

Because there are only a few of these cameras, it's unknown if the Quta Photo Machine lived up to the marketing hype but, interestingly, there must have been some type of licensing agreement in Europe. Two English campanies advertised their own versions (i.e. Fallowfield's "Popular" Automatic Ferrotype Camera) and, in another collection, there is a nice example of an English model branded for the French market.

Regardless of its success or failure, this camera and others like it must have evoked feelings of excitement and anticipation while waiting to see a picture in less than 60 seconds; the same feelings we got with the old Polaroids and today with digital cameras.