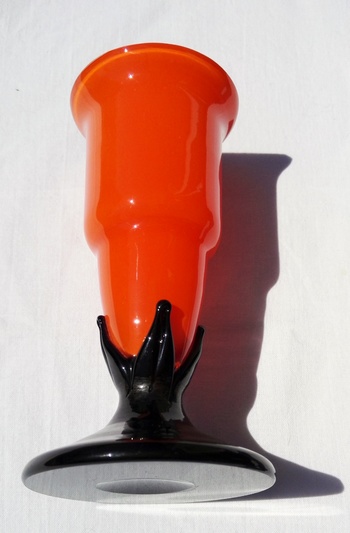 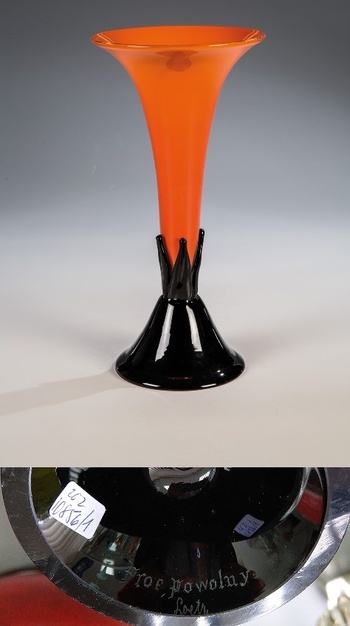 This is now my third succesive contribution to CW concerning Michael Powolny's designs produced by Loetz. The vases sketched by PN=III/279-285 (1914) founded the basis for the famous Ausf-157 series. Interestingly Powolny's vase shown in PN=III/285 (1914), known from a foto of the glasses designed for the 1914 exhibition of the Vienna 'Werkbund' and published in 'Loetz Boehmisches Glas 1880-1940' on page 267 is similarly repeated four years later in PN=III/922 and III/1143 and here shown as example in foto 4, directly taken from the auction at Dr. Fischer, Germany, March 2018 lot 652. This Prof. Powolny signed vase was sold for 10.000 € (+30% fees) an extraordinarily high price for a Loetz 'Tango' glass vase. Now, these vases all show a characteristique four-fold sprout arrising from the black foot attached to the bottom of the opale orange/red chalice. My vases were manufactoried accordingly, but the PN's are not yet known, nevertheless I believe from the apparent similarity, that they are both made by Loetz, too. My vase in fotos 1,2 stands 14.5 and the second one stands 14.0 cm high, the vase sold at Dr. Fischer's auction is 24.5 cm.