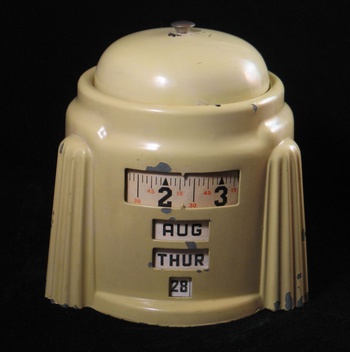 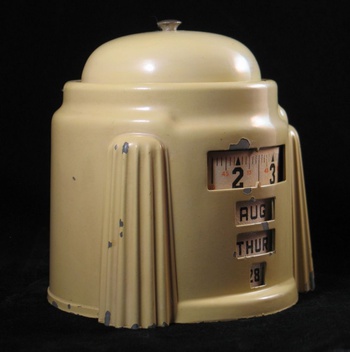 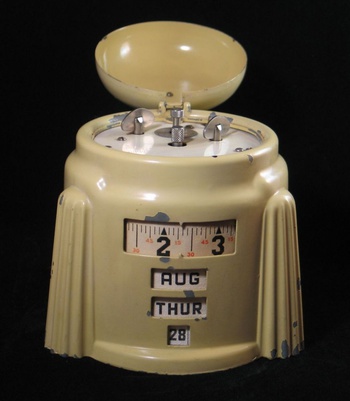 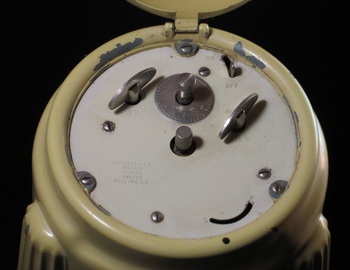 Marketed as the Kal Klok, this rotary calendar clock was designed by Herbert W. Lamport and patented in July 1938. It has a cast metal case and ivory painted finish. Winding/setting knobs for alarm and time are concealed under the hinged domed lid. The upper opening in the clock case displays the time on a rotating tape measure-like dial. Windows below display the month, day, and date. The three calendar dials are manually set (not operated by clock movement) using a knob on the back of the clock case. Height, 5 1/2 in. x 5 3/8 in. wide. Key wound 30-hour movement.

Although this looks like a Lux Clock Mfg. Co. rotary clock, it was not made by Lux. The three patent nos. on the Kal-Klok pertain to the movement only, and all are assigned to the Western Clock Co. (Westclox). The Kal Klok wasn't manufactured by Westclox either, but probably by the Howard Clock Corp. of Chicago. Howard was owned by Joseph C. Morris and Jim I. Silvers, who are listed as assignees on Lamport's Kal-Klok patent. The company made a range of novelty clocks in the 1930s-40s, including ones shaped like cannons, airplanes, zeppelins, ship's wheels, etc.

The Kal-Klok was available in ivory, bronze, and Chinese red finishes, often with wrinkle paint. I've seen them with a nickel/chrome finish as well.