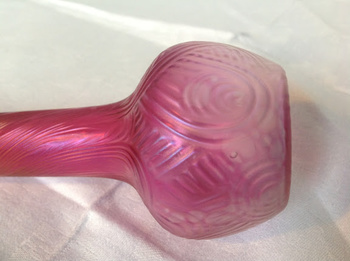 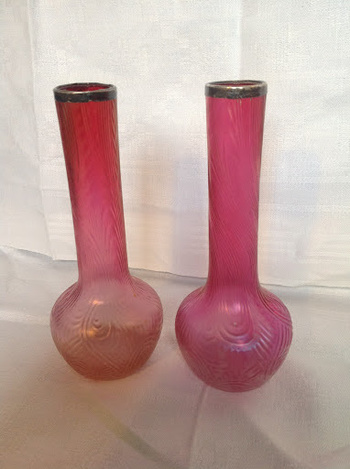 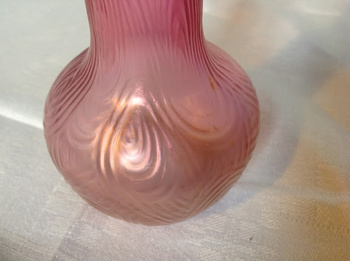 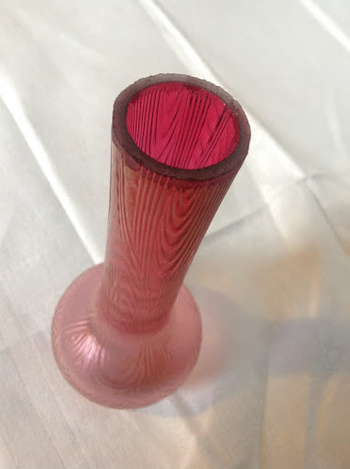 For all those who like pink and pairs, this is my latest little find. A (near) pair of Loetz solifleur vases in the Spiraloptisch decor - in pink! I have seen Rusticana in pink before, but I have never seen pink Spiraloptisch. Of course, I haven't been looking that long!

I say near pair because although they were clearly blown in the same mould, and I would bet they have spent their entire lives together, actually the shape, colour and iridescence is not the same on the two, although they are both about 7.25" tall. The one on the left is a paler pink with a yellower iridescence, the one on the right a darker and more mottled pink, with a more blue tinged iridescence. The "bulb" on the lighter one is slightly shorter, the shoulder shape of the two is slightly different, and the neck on the darker one is slightly slimmer, making it harder to see the pattern on the neck.

I find it fascinating that there can be such differences between two vases that "should" be identical, since they came from the same mould and were finished in the same way, probably at the same time. It all goes to show that each piece is made unique by the finishing.

I believe thay have always been together because they both have English hallmarked sterling silver collars for London 1906, with the same illegible maker's mark, but they came to me from Germany. It seems untenable to me that they travelled to the same silversmith in England, and then to Germany, separately and have then been united by serendipity.

The other thing that is interesting about them is the quality. New collectors (like me) hear a lot of myths about how Loetz was the quality manufacturer and no-one else produced such quality work or finished it so well. That may well be true for the high end pieces, but I have to say it is not the evidence of these vases.

If this were not an undeniable Loetz pattern, they would not scream Loetz as opposed to any other Bohemian maker. The silver rim on one is loose and as can be seen from the picture, the rough, (un)finishing of the rim is not what one comes to expect from Loetz quality. It looks no different from my Kralik or Rindskopf silver rimmed pieces. What was to be hidden got exactly the same treatment from Loetz as it would have done anywhere else. The silver rims are also not a quality finish - despite the hallmarks they are little thicker than aluminium foil - this was clearly not a high end product! Finally, there is mottling in the pink casing on the inside and an air bubble at the base of the darker one which would, today, undoubtedly render it a second.

So, far from perfect in creation, clearly not designed or sold as cabinet pieces, but for use in more modest homes, yet they have remained undamaged for 106 years. I love them - all the more for their imperfections! I hope you like them too.