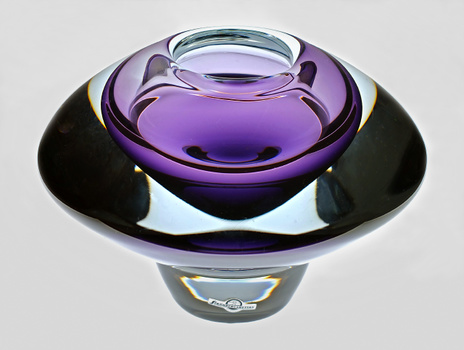 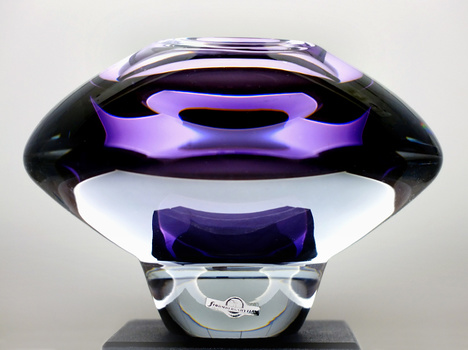 Asta Stromberg's Sputnik B895 from the same time period has also a space-theme and was inspired by the rockets that shot up the Russian Sputnik satellites. But I agree anyway Gunnar Nylund as more probable for the "flying saucer" design of this vase. It was also sold as a Gunnar Nylund glass piece. Most likely, it was designed already around 1956 but not launched until later.

As I understand had Strömbergshyttan a large store of newly designed glass models by Gunnar Nylund. His contract expired at the end of the year 1956 and all he drew until that (from approx 1952/53) when he was basically in full-time activity, was not launched directly. Much came probably first few years after. I could imagine that featured models designed by Nylund 1956 or earlier, was launched until about 1959/60, which for vases means up to numberB972 .

By Ricke/Gronerts book GLASS IN SCHWEDEN 1915-60 and its part 2 with product catalogs, one might conclude that it then came surprisingly few new models from Strömbergshyttan between 1959/60 and 1962. For example, states that the maximum number of vases 1959/60 is B972 , and highest vase number 1962 is B974 . Which means there will be only launched 2 new vase models in these years , which I think is remarkable. One explanation may be that they lived quite well on all that Gunnar Nylund designed before, but also a lot of Gerda Strömberg's classics and some new that Asta Stromberg designed by the late 1950s. She seems to have become more active in the design after that Nylund quit his full-time contract 1956/57. Also the fact that both Asta Stromberg's husband Eric, and her mother in law Gerda died in 1960, I think has affected. Asta got now alone take full responsibility for the company and certainly had both the sorrow and the administration to handle.

From 1962-63 , more speed with new designs came, among others Rune Strand was engaged, and from at least 1967 onwards drew Nylund again some glass for Strömbergshyttan, now on a freelance basis. As I can see from some documents, I interpret that Nylund has not designed glass for Strömbergshyttan between the years 1957-66, but a lot of what he designed up to 1956/57, was launched first 1-3 years later. Hope that further research may reveal if my interpretation is correct ?