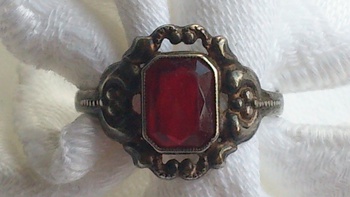 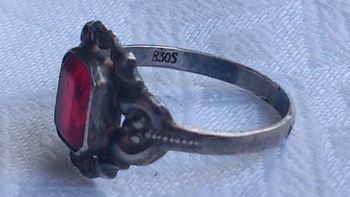 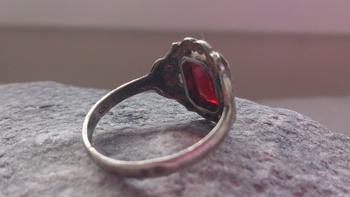 I would love to know the age, origin and style of this ring that I just bought. I´ve seen two other rings like this, one exactly like this and one in the same model but with a yellow stone in it. One of the rings, the one that looked just like mine, was said to be german, marked 835 and from the late 19th Century and the other one was said to be from the 50's but had no information other than "european". So I´m quite confuced.

My ring has several stamps, one that sais 830S (silver). I know 830S was used in Norway but in the page www.925-1000.com I found a german mark aswell with that 830S mark. I found information on antother sight saying that most european countries up until 1920s used the 830. Other sources say that 830 is common in older european silver jewelry. I wonder what "older" means here? My ring also has the Swedish importstamp for silver that was introduced in 1913, and the ring is marked "54" inside. I wonder what that means? Is it a size and in that case does that say anything? The ring is about 17mm i diameter.

The ring has a rubyred stone or glass that is cut. I think it´s what you call pastestone in English but that´s just my guess.

The ring is very patinated and dark but I´m thinking of keeping it like this.

Grateful for information of anykind that can lead me to an answer.