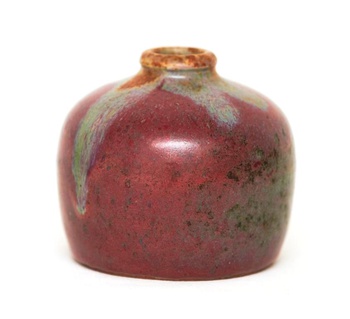 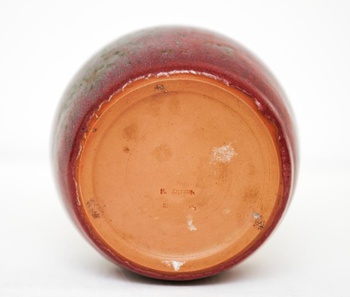 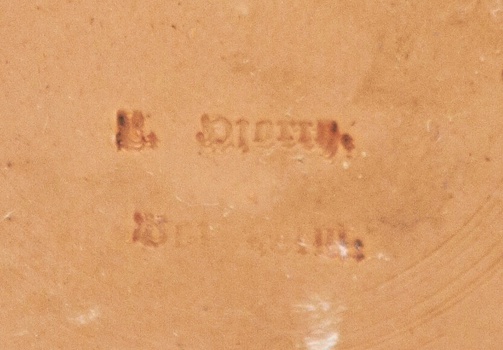 Stonewase made by Hans A. Hjorth (1878-1966) at one of the most influential potteries in Denmark, L.Hjorth, founded in 1862 on the island of Bornholm (the only place in Denmark with clay suitable for stoneware production) by Lauritz Hjorth. When he died in 1912, the factory was taken over by his two sons Hans and Peter. Their sister Thora also worked there (here’s one of her vases, from the late 1920’s, also ‘Asian’ in style: http://www.collectorsweekly.com/stories/110265-large-marble-glaze-l-hjorth-vase). The Pottery is now part of the Museum of Bornholm as a ‘live exhibition’.

Hans A. Hjorth produced the very first stoneware in Denmark, in 1902, allegedly a good ten years before larger places such as Royal Copenhagen, and Bing & Grondahl managed to do it. Between 1902 and 1912 he made a series of stoneware vases and bowls clearly inspired by Japanese ceramics - they are simple in their shape and often have a mottled or monochrome glaze with a drip glaze in another colour. He was awarded with a gold medal for his stoneware work at the World’s Fair in Brussels in 1910.

Height: 9.7 cm. Mark: Mark: 'L. Hjorth' in Gothic lettering (used only very early in the 20th century; later L. Hjorth in Latin lettering), along with the name of the island 'Bornholm'. The vase does not carry Hans A. Hjorth’s monogram (HAH), which he started using in 1906, but it is pictured on page 84 in a Danish monograph on L.Hjorth, where it is dated to 1910.