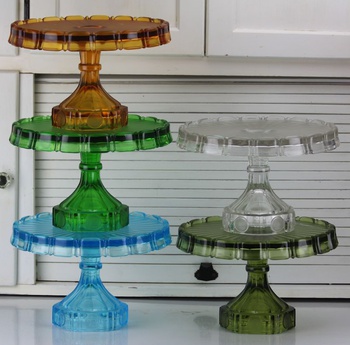 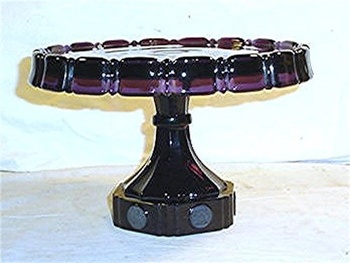 This is my collection of Fostoria "Coin" cake stands. Fostoria Glass Company made their 'Coin' cake stands in the five colors as shown in the first images. Fostoria introduced the 'Coin' pattern in crystal clear glass in 1958; blue and amber colors were added in 1963; emerald green was made only in 1965 and then changed to olive green; ruby red was introduced in 1967. Although the 'Coin' pattern was made in ruby glass there was no cake stands in ruby. A color that Fostoria did NOT produce in the 'Coin' pattern is purple; however the crystal version of Fostoria 'Coin' contains manganese, which turns the glass purple when exposed to high doses of UV light. The purple version of the cake stand pictured here (for illustration purposes only) is the result of 'damage' to a crystal cake stand from extended exposure to a UV light source; other pieces in purple have been known to show up for sale as well.