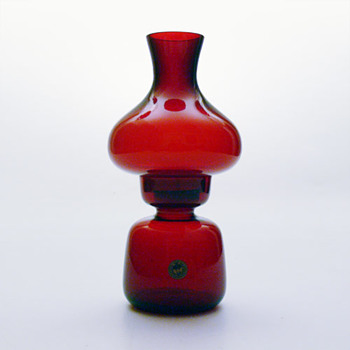 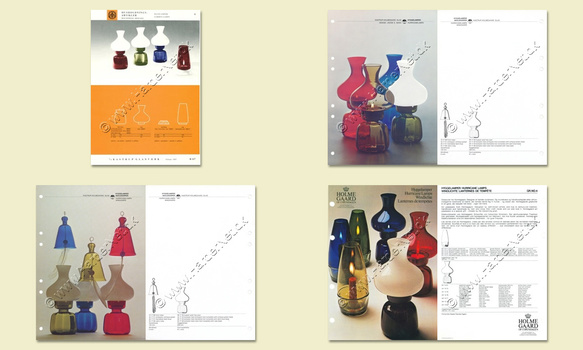 This one is one of Denmark's best known candle lamp designs. It was produced by Kastrup Glasværk from 1960 1o 1976 and designed by the great Jacob Bang.

They came in blue, green and red, with both parts in the same colour or mixed with an opaline shade. at hardernet.dk, the Bible of Holmegaard glass for many of us, there is a shade in havana brown colour from the Næstved Museum, so I guess other rarer colours were made other than those three original ones.

In the 1965 Kastrup catalogue these lamps appear as "havelamper" (garden lamps), and the bases appear as being made in the three colours (green -ref. 28560-; cobalt blue -ref. 58561- and red -ref.28562-) whereas the shade appears as only being made in opal -ref. 58563-. In later Holmegaard catalogues from 1967 onwards, they appear named as "hyggelamper" (ornamental lamps) and it looks like the base ans shade are sold together with the same reference numbers. I wish I could see those Holmegaard catalogue pages as on hardernet.dk they only appear as to show the refferences, but one can't read anything on them as they're too small images.

My lamp bears the blue KASTRUP-HOLMEGAARD label with crown... that I think it was used from 1965 to 1970, but there is no precise information about it. Mybe somebody can help about this particular subject.