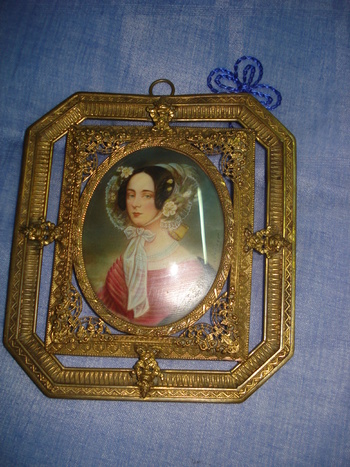 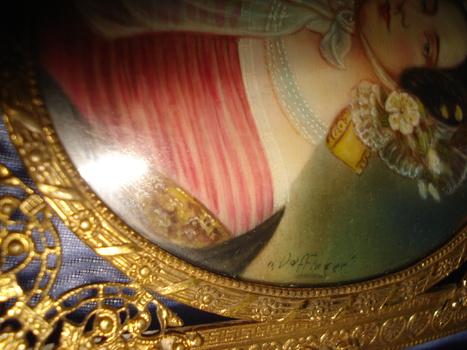 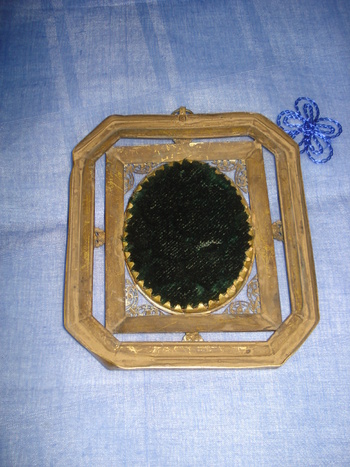 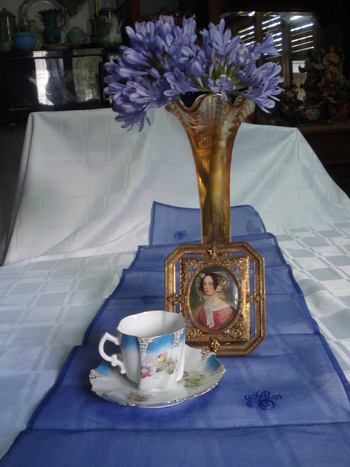 More of the big purchase of the last day of 2015: a wonderful miniature in an ormolu frame. In the second picture you can observe the signature a. Daffinger, I suppose it means after Daffinger, or a copy of a famous portrait done by Morita Michael Daffinger. If you open the picture you can observe it is hand painted and that the white accents have a bit of height as they were done with oil and brush. Though, I am not sure if it is not a very well done print with only the clear traces done by hand. I found on the web that a print of 1908 could be purchase at http://www.periodpaper.com/collections/portrait/products/1908-print-crescence-szechenyi-seilern-marianne-austria-original-071059-ins3-084
I also found other two similar miniatures though ours is much better
https://auctionata.com/o/105058/miniature-portrait-of-empress-maria-anna-of-austria-c-1840?noredir=1
http://reggiedarling.blogspot.com.ar/2011/05/is-she-really-who-and-what-she-is.html
The history of Daffinger is very interesting, Wikipedia says
He was born in Vienna, the son of Johann Daffinger (1748–1796), a painter at the local porcelain manufactory. The eleven-year-old likewise was accepted as an apprentice and later went on to study at the Academy of Fine Arts, where he attended painting lessons with Heinrich Füger. His specialty remained painting on china.

Portrait of Countess Ferdinandine Karolyi, c.?1840
From 1809 he worked only on portraits, specializing in miniature painting on ivory. In 1812 was employed as a portraitist by the Austrian Foreign Minister Klemens von Metternich and became administrated the extensive portrait collection of Metternich's third wife Princess Melanie. He was influenced by Jean-Baptiste Isabey and even stronger by the English portrait painter Thomas Lawrence, who visited Vienna in 1819. In his late years he concentrated on the painting of flowers.
Daffinger died in 1849 during a cholera epidemic in Vienna and was buried in the St. Marx Cemetery. In 1912 his mortal remains were transferred to an Ehrengrab in the ViennaZentralfriedhof. Daffinger left more than a thousand portraits were mostly owned by the Austrian imperial House of Habsburg-Lorraine.
His portrait graced the obverse of the Austrian 20-schilling banknote that circulated until the introduction of the euro in 1999.
The frame is very pretty. Thanks for looking and any commet is welcome.