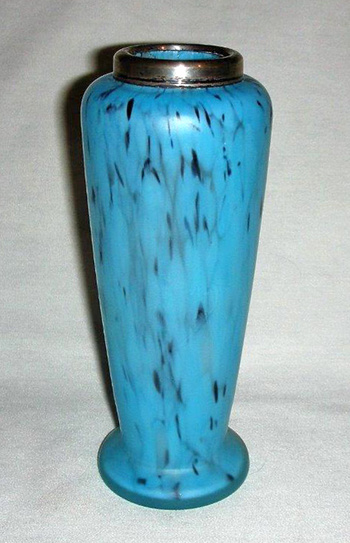 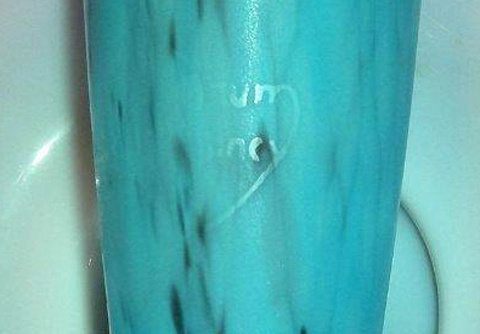 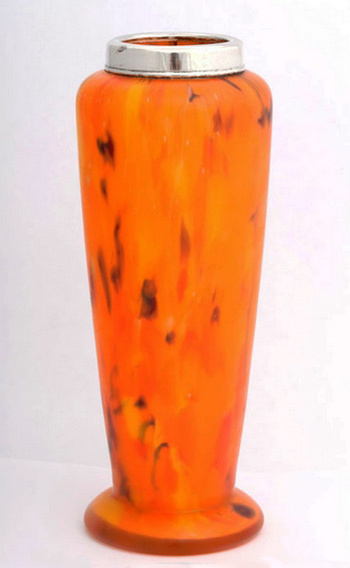 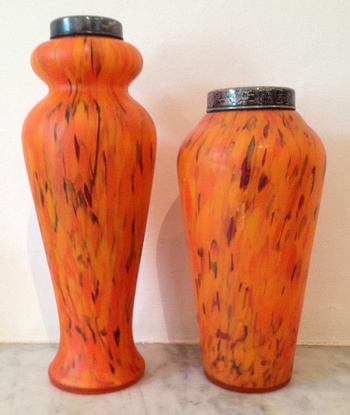 Recently I came across a really cool find, that I think may solve a mystery of a ‘Bohemian’ décor several members of CW have wondered about over the years – this post is for you, Ian, and I believe Jericho and Craig have been interested in this décor, too. (I also own an example, which I posted about two years ago on this forum.)

I found a 6” tall vase on Ebay recently that was satin smooth, in a spatter pattern of pale blue with black, with some areas of clear showing between the colors. It had deco era silver collar by Henry Perkins & Son (HP&S), I was surprised to see that rather than being Bohemian, it had ‘Daum, Nancy’ molded into the side of the vase! (Images 1 and 2) The vase was very familiar to me, since I have seen the décor in orange a number of times. I did a quick search, and came up with an orange version (collar dated 1934) in the same shape as that of the signed blue vase. (Image 3)

Ian has posted two examples in this décor that I now believe are also Daum, with silver collars, but in varying shapes. His have collars dating to 1923 and 1925. (Image 4) My own vase matches one of his, and I have found several other examples on the internet.

These vases are literally satin smooth to the touch – much ‘silkier’ than other acid etched vases I have held.

Anyway, I am excited to share this discovery with you – a décor that I had always assumed was Bohemian appears to be French – there is always something new to find out in the world of glass! :)