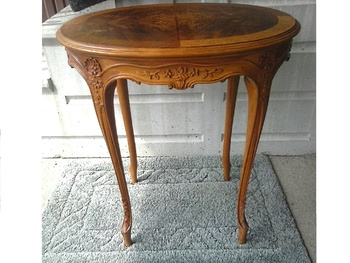 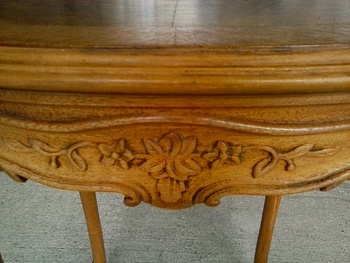 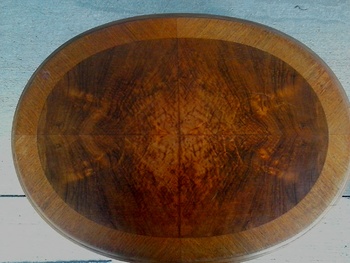 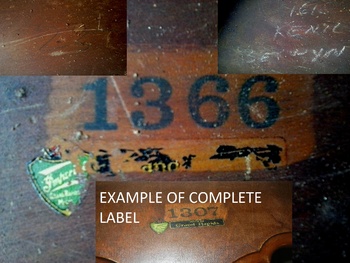 Salvation still continues to produce some nice finds. Today being half price Wednesday I had my eye on a vase and painting from yesterday. Both also sold for full price yesterday so a bit of a bummer....but then I went back to the furniture area. I'm still looking for pieces to display items on at the co-op. There was a nice half round console table painted black...can't get that in the car...then there was this beauty. A Louis XV style oval oak occasional table made by the "Imperial" Furniture Co. of Grand Rapids Michigan. There is a partial label and style number on the bottom to ID and date it to the 20's-30's and these pieces appear to be highly collectible. There's also some chalk writing and a penciled number under the top. It measures 25" tall (the penciled number?) and the beautiful inlaid top is roughly 23" x 17" There was even a piece of tempered glass to protect it. Seeing some really good prices on these pieces so this is staying home with me. I'll take a little swivel door sewing table I already have instead. -Mike-

Over the years, Grand Rapids has certainly earned the name “Furniture City.”Important manufacturing entities such as Baker Furniture Company, Berkey & Gay, Herman Miller Furniture Company, L. & J.G. Stickley, John Widdicomb Company and many others are located there.
If Grand Rapids is known as “Furniture City,” the Imperial Furniture Company, established in that city in 1903 (one source says 1904), was once anointed (perhaps by itself) as the “world’s greatest table makers.” F. Stuart Foote founded the firm; he was once the lumber buyer for L. & J.G. Stickley.
Imperial made all sorts of tables, desks, teacarts, china cabinets, buffets and chairs for dining tables. Products ran the gamut from telephone tables with small stools and nesting tables to tilt-top tea tables, book tables, end tables, extension tables, lyre base tables, console tables (with mirrors) and table desks.
Mahogany, walnut, oak, chestnut, maple, pine and gumwood were just some of the woods used; other woods were utilized for decoration, such as satinwood, Pollard oak and ebony.
After Foote’s death, Bergsma Bros. acquired Imperial Furniture in 1954 or 1955 (depending on the source consulted). One reference says that Bergsma Bros. operated the manufacturing facility until 1983, while another says it closed in 1962.