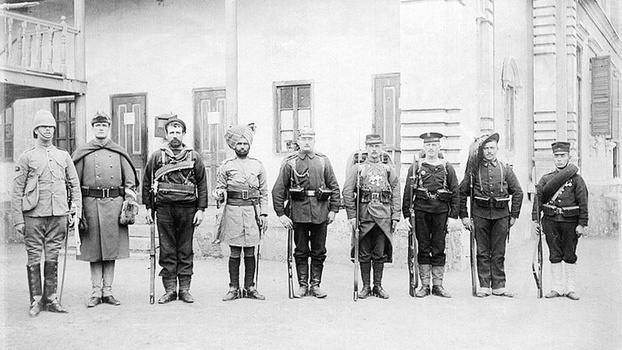 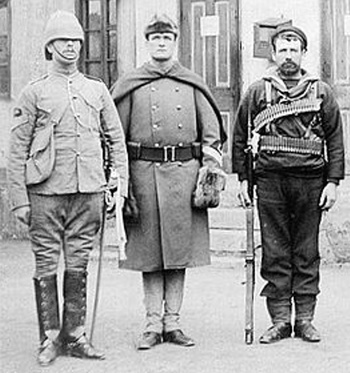 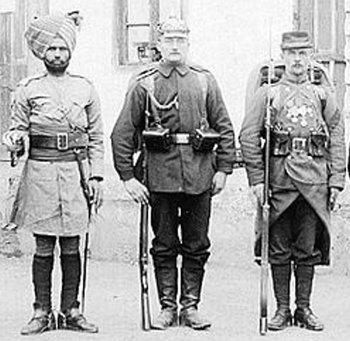 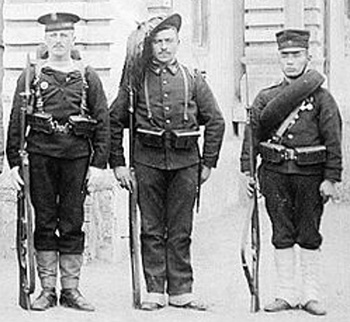 Although I don’t have an original print of this photo, I thought I’d share it since I just posted that Boxer rebellion miniature medal. This has been the wallpaper on my computer for several years now (I keep the icons at the top), and they are the faces that greet me each time I sit down to write these posts.

An uprising by the Society of The Righteous and Harmonious Fists (The Boxers) began in 1899 against foreign influence and colonial infringement. In June 1900, the Boxers had laid siege to the foreign legations in Peking. An international expeditionary force composed of soldiers and sailors from the British Empire, Russia, Japan, France, Germany, Italy, Austria-Hungary and the United States was sent to relieve the legations, protect foreign citizens, and of course our foreign interests.

Captain C.F. O’Keefe, 36th U.S. Infantry, took this opportunity to do a series of photographs of all these various militaries, usually front, back and sides to show off the packs, equipment, etc. As a collector of military items from this period, CPT O’keefe’s photo studies are a gold mine. Here are a group of soldiers photographed from the front. I don’t have O’Keefe’s notes on this picture, so my description of this grainy image may have some errors. Just think of it – 14 years later, all these countries will be at war as allies or enemies in World War One.

Starting from the left, we see a British Sergeant of cavalry, in his khakis and pith helmet as worn on duty overseas.

Beside him is an American First Sergeant, complete with cape and winter muskrat cap and gloves dug out for this little photo shoot.

Next we have a British Bluejacket of the Royal Navy, going a bit too gung-ho with the ammunition. The watch cap is a bit unusual, but I can still ID him from the bandoleers and braces.

Then we have an Indian Cavalryman – Much of the British contingent was brought over from India, and he could possibly be one of the Bengal Lancers that were in the initial British Force.

Next is a German infantryman, complete with spiked helmet and wearing a marksman’s lanyard on his blue pre-field grey tunic.

Next is a medal bedecked French soldier in full marching order, his coat tails buttoned back and his pack visible over his shoulders.

Not to be outdone, beside him is an Austro-Hungarian sailor, also wearing his pack and probably wishing he hadn’t been ordered to pose for this American officer.

Next is an Italian soldier from the famous Bersagliere, or elite light infantry, with his distinctive wide brimmed hat with black cock feathers cascading down the side.

Lastly, we see a soldier of the Empire of Japan in marching order with his bed roll over his shoulder. His is the only Asian contingent (not including Asian elements of the British Empire). In five years his army would stun the western powers by defeating one of their own - the Russians.