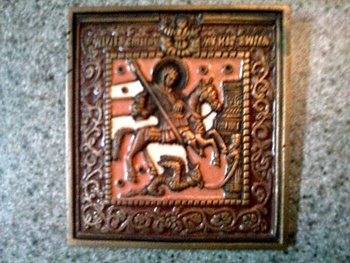 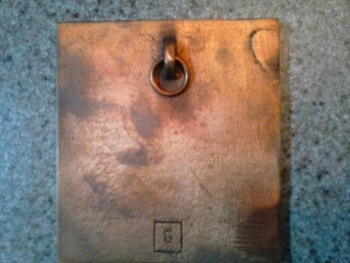 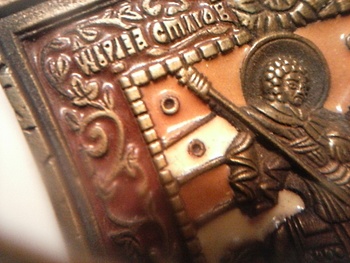 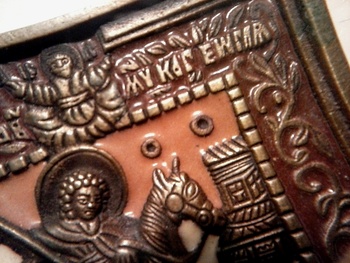 Not that much left at Salvation Army the day after half price Wednesdays. However I did find this neat little bronze Russian icon. It measure 3" x 3" square and depicts St. George slaying the dragon. Actually the princess ends up with a new pet so he's not really slain. There's a small metal loop on the back to hang it. The only mark is a "G" within a square. The few that are online are 19th century and not maked, but I don't think this is that old. The enamel work is nice and the casting is fairly good too. There are some words at the top that look like Cyrillic script. Possibly a souvenir brought back from a trip to Russia. -Mike-

St George Saves The Princess From The Dragon....

Then said S. George: Fair daughter, doubt ye no thing hereof for I shall help thee in the name of Jesu Christ. She said: For God's sake, good knight, go your way, and abide not with me, for ye may not deliver me.

Thus as they spake together the dragon appeared and came running to them, and S. George was upon his horse, and drew out his sword and garnished him with the sign of the cross, and rode hardily against the dragon which came towards him, and smote him with his spear and hurt him sore and threw him to the ground. And after said to the maid: Deliver to me your girdle, and bind it about the neck of the dragon and be not afeard.

When she had done so the dragon followed her as it had been a meek beast and debonair.