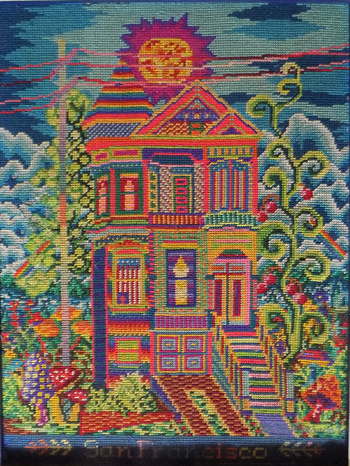 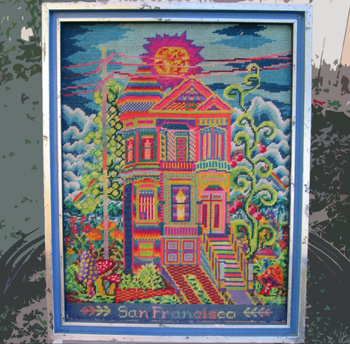 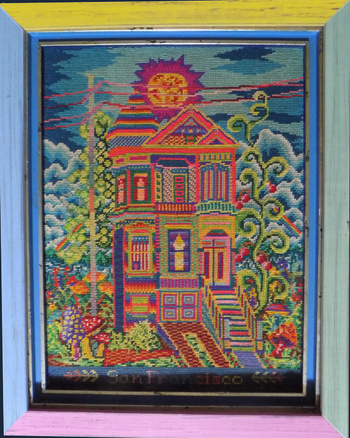 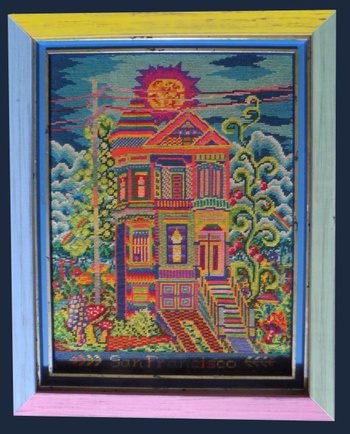 When I first saw this, every cell in my body exploded. WHAM! SPLAT! Discovered in a Goodwill-type second hand store in Seattle, still in the Hippie's choice original frame shown in the second photo. I had an idea on exactly how I wanted to frame it - see last two photos. The trouble I first encountered was i could not get the original frame off... I counted 49 somewhat rusting nails had been hammered through the wooden needlepoint frame into the frame itself... FORTY-NINE! So removing it was not a viable option. So instead I had my custom frame built large enough to include the original. Liked the end result - looks even better.

Amazingly, this was signed by (I believe) “D. McPherson” and completion date is 1974. A PERIOD PSYCHEDELIC needlepoint of a hippie home in San Francisco and one would think in Haight - Ashbury. Extraordinary color and psychedelic imagery during the Hippie Era... I believe this is one-of-a-kind folk art... this colorful vintage needlepoint is a rare and colorful artifact of the Hippie & Psychedelic Culture. ...I mean seriously, look at the psychedelic mushrooms by the side of the road! The counter culture American flags in the windows, the psychedelic plant life etc. The creativity is far out. Man. Does it get better than this? Old hippies, SALUTE!