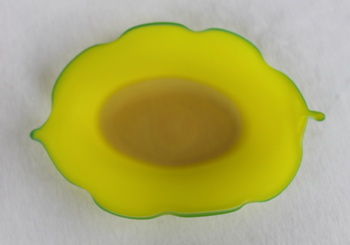 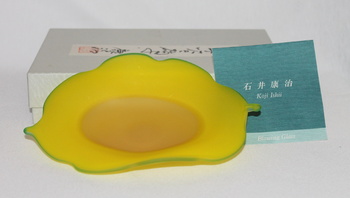 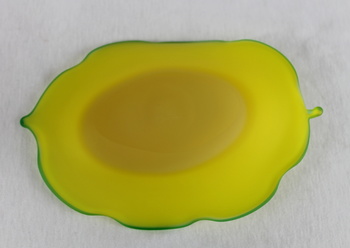 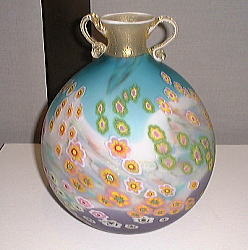 Ishii is another Japanese artist whose work is generally way outside my financial means, and so I was pretty happy to find this small bowl at an affordable price. The problem I find is that whenever I can afford a work from these premium artists they are always quite simple, and not indicative of the really great art they generally produced.

Koji (Yoshiharu) Ishii (1946-1996) graduated from Tokyo National University of Fine Arts in 1971 and started work at Toyo Glass that year. He remained full time at Toyo until 1977 when he started working as an independent glass artist from his studio in Chiba Prefecture, although he continued his design association with Toyo until 1988. Like many Japanese glass artists he studied overseas, in his case at the London Royal College.
Ishii mainly focused on making small bowls and glasses, although in later years he started producing larger and incredibly detailed vases. I have seen photos of some absolutely glorious pieces from his hand, with incredible detail housed in a very Japanese aesthetic.

This bowl is 16cm long, and has been made in a leaf shape, with a light brown centre and yellow lip. The very edge of the lip has been trailed in bright green. The work has been finished matte, and is signed on the base Koji.
I must say my photos here have let it down! The fourth photo is of one of his later vases.