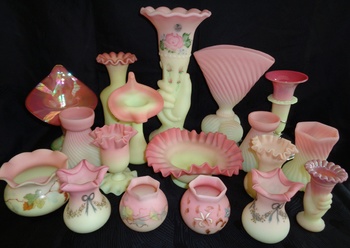 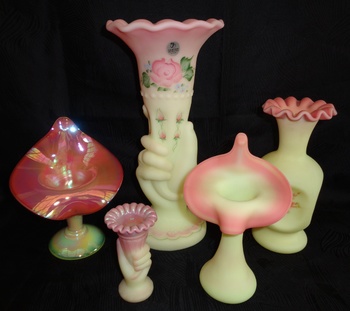 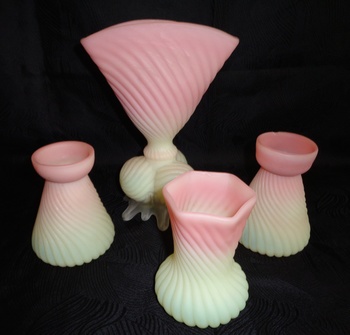 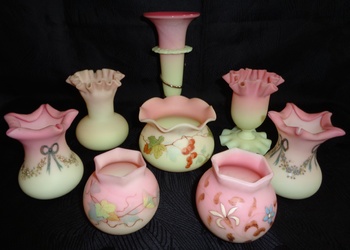 What can I say about Burmese glass? It's pure luxury! Gold & uranium sing together in a curious harmony, to create magic in glass.
First photo shows all of the Burmese in my collection, except for a Thomas Webb & Sons three piece fairy lamp, which lives at another address.
Second photo shows 20th century Burmese made in the USA by Fenton, & one piece by Gibson Glass - the glossy, iridised Jack - In - The - Pulpit vase. I do not (yet) have any Burmese by Mount Washington Glass Co. the original inventor of the colour. Perhaps one day when I strike it lucky to find one cheaply (I can dream). It just doesn't turn up in Australia.
Third photo shows examples of what I believe to be Welz Burmese. After I got the three ball footed fan vase last year, it made me take another look at three other Burmese specimens that feature the same swirl ribbed pattern. Those other vases always puzzled me, as the shapes did not fit with any documented shapes by Thomas Webb & Sons. So it seems that Welz was making its own version of Burmese...
Fourth photo shows glass made by Thomas Webb & Sons. The glossy, single epergne trumpet would have once been part of a fairy lamp epergne. I purchased it "married" with a silverplate stand in Portobello Road, London in 2003.