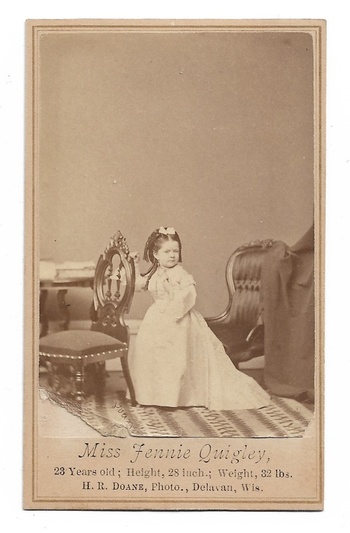 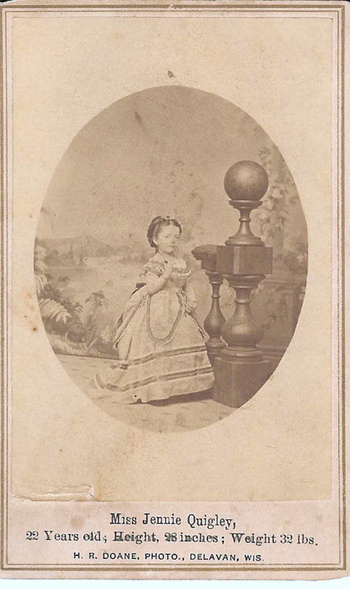 Hello Everyone.
Good Evening from Ontario.2018-04-28
I found this CDV, Carte de visite Yesterday, i just want to research a little more before posting, i am glad i did, because what I found is very amazing and great History here.
At the bottom of the CDV we can read : Miss Jennie Quigley, 28 years old; Height, 28 inch. ; Weight, 32 lbs.
H.R. Doane, Photo., Delavan, Wis.

PICTURE #2 was found online, she was 22 years old, 6 years younger (sorry for the poor quality picture)

Here what I found :

I also found the following by doing a Google search for "Jennie Quigley, midget".

Jennie Quigley was born in Glasgow, Scotland around 1853. She joined the Lilliputian Opera Company in America, after studying singing and acting, and adopted the title, Scottish Queen. As a performer, Jennie toured Europe and appeared before Queen Victoria and several other crowned heads of state. Her mother, Jane, was her constant companion and chaperone. The stage was her lifelong love. When she wasn't traveling, Chicago was her home.

There are differing reports about her size. One of her original cartes-de-visites, gives her measurements as 28 inches, and 32 pounds, but I have also read that she grew to be 34 inches and 36 pounds. Regardless of her size, she was often described as an attractive and graceful young woman, and was highly praised by critics for her talents.

Jennie was sometimes given starring roles, such as Pocahontas and Cinderella, but would also frequently introduce the â€œspecialties" during intermission. These specials were designed to enhance the overall production - they varied from singing and dancing, to more elaborate entertainment with special effects. Jennie would be paired off with another star, such as Colonel Speck, Commodore Foote or Admiral Dot, and together they would sing duets, dance, and 'flirt' on stage to amuse the audience before the main production resumed. This flirting sometimes continued off stage, and after Jennie's death it was learned that she and Commodore Foote were sweethearts.

Whenever she could, Jennie would make a grand entrance on stage in her miniature Brougham carriage, pulled by a shetland pony. A royal coachman would open the door, bow with reverence, and assist Jennie as she regally stepped down to the stage floor.