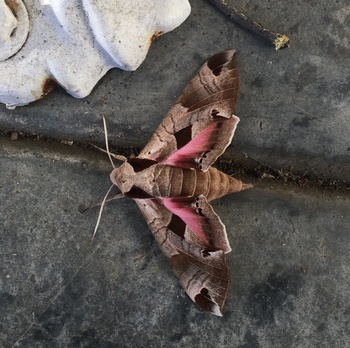 A visitor at my front door!!

The large Achemon Sphinx Moth comes out at night, but if you're up, look for its bright flashes of pink when it stretches its hindwings.
Achemon Sphinx Moths are members of the hawkmoth family. They are large, strong and fast. This species is nocturnal and can be found sipping nectar from a variety of flowers including Japanese honeysuckle, phlox and petunias. Their wings can beat so quickly that they may be mistaken for a hummingbird. They span most of the North American continent and are on the wing throughout the summer.

Adults are a light brown or tan color with symmetrical dark brown patches near the 'shoulders', as well as at the middle and tip of each wing. When wings are spread, the smaller hindwings reveal a bright pink color. Furry legs are covered in cream colored hairs. As lovely and large as the moths are, their offspring are undesirable to vintners.

The larval caterpillar is also brown, like the adult. They are larger than members of other families of caterpillars. Seven short white lines run diagonally down the side of the hairless body from the head to its other end. It is a part of the hornworm group of caterpillars thanks to a long spine, or "horn", at the end of its body. As the caterpillar grows and matures, the horn is eventually lost and an eyespot develops instead. This species feeds on the leaves of grapevines and is known to be a pest in vineyards. Virginia creeper and woodbine are other popular food sources for this caterpillar. It is usually seen chewing leaves in August and September.