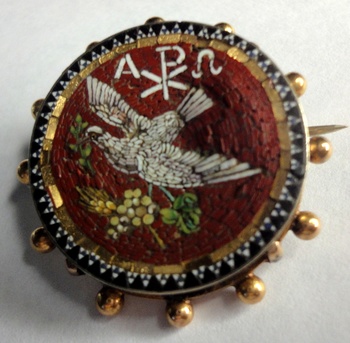 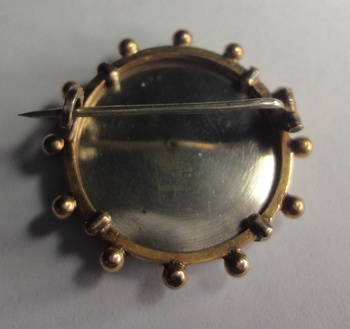 Micro Mosaic in gold and silver. As often there are no marks. Some tesserae seem to be missing on the photo, but this is not the case. However, there is a slight bulging in the mosaic.
The are several Christian symbols;
The dove with branche for reconciliation and peace, and also a monogram of Christ.
The monogram is composed of the Greek letters X and P, which form the first letters of Christ. An addition here is left and right the first and last letter of the Greek alphabet, as a symbol of the beginning and the end.
As a symbol of blood, the grape is the sign of life and death. The grape vine or bunch refers to the Eucharist or the Lord's Supper and thus to the sacrificial death of Christ.