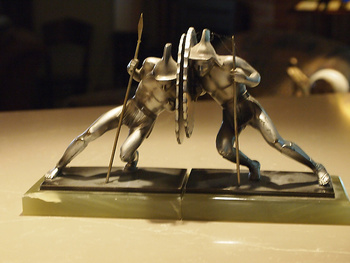 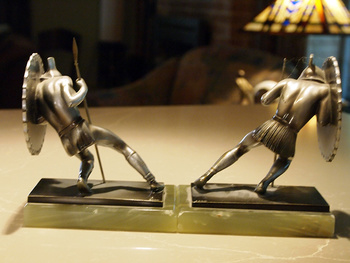 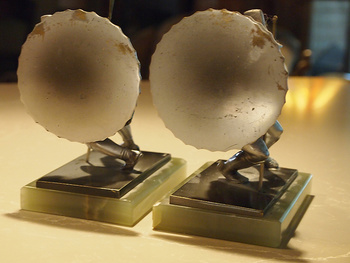 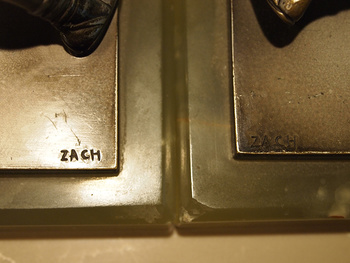 These two warriors are silver cold painted bronze (not spelter), they stand on Green oynx and are signed Zach. If you noticed a difference in size, that is because there is, one is a tiny bit smaller than the other and they are cataloged as different pieces. There are differences in the hands on each also, the taller figure's hand in back more between the shield and his torso, while the smaller one is out and is more pronounced and out in the sculpture, the torso is further out than the taller one. Both stand on an oxidize platform about 4.75 inches long by about 2 5/8's inches in depth. The green onyx bases are 5.5 inches in length and 3.5 inches in depth. The tallest is 6 3/16" the shorter one is 5 15/16's of an inch or about a quarter of an inch in difference. The spears have been shorten on both, the taller one is missing a tip but otherwise despite missing paint and a few fleabites they are in excellent shape.
Zach did not classify them as bookends.

J. B Hirsch manufactured them as "Asian Warriors" abt 1930. They were uniform in size and Hirsch couldn't resist putting Ivorine faces on them.

In his early life Zach went to Vienna, Austria, the famous birthplace of the Vienna Bronze and the foundry Bergmann. Arrived in Vienna, the young artist began to study at the Academy of Fine Arts. The Vienna Academy of Fine Arts was founded in 1692 as a private academy modelled after the Accademia di San Luca of the court painter Peter Strudel.

His teachers were Hans Bitterlich, who taught as professor at the Academy during 1901 and 1931 and Josef Müllner, who hold a professor since 1910. Zach worked during his time in Vienna for many various foundries, where he improved his sculpting skills and created many bronze statues. He finally became famous for his Art Deco figures of dancing women. The talented sculptor reflected the typical Art Deco characteristics on his sculptures.