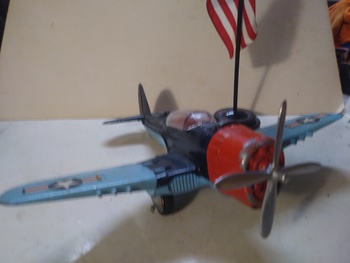 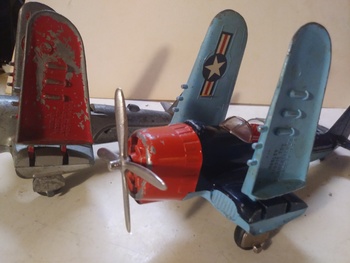 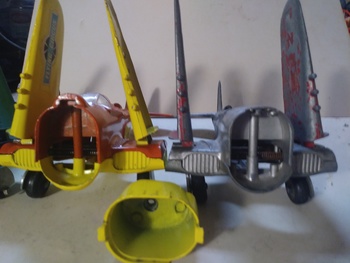 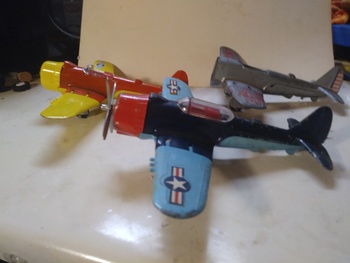 Got 2 More Hubley #495 airplanes like the Air Circus one I posted last week. The dk. blue/lt. blue/red is exactly like the one I had around '62-'63. I related in the last post how much I loved this plane as a kid. It's got a good heavy feel, an 11" wingspan, cool WW II'ish colors, folding wings and retractable landing gear. I was really into WW II naval planes back then(still am) and this had to be my favorite childhood toy plane. I loved models also but as a true toy plane this was the best. Don't get me wrong I had some other nice planes, a cool battery operated Japan tin plate 4 engine prop plane, a wind up Ohio Art stamped metal seaplane etc., but they weren't like this tough Hubley. It was made rugged like the navy plane it represented. This color combo was offered at least in '61-'62 maybe later with another blue/yel/red plane until '65. I put the prop and canopy on it from the Circus plane for the pics and to play with it. It's fun having one in my hands again after 56 years.
The junker shown with it is the early version in what's left of the aluminum/red combo offered from '56-'60. It's missing, cockpit, canopy, cowling and prop. However I need this style upper fuselage for another Hubley 500 series sets tractor trailer sets, one of the rarest and coolest in fact. I got it cheap too.
If you'll look at the third picture you can see the difference in the upper cowling mounts in the pre'61(right) and the later(left). The early rivet type mount was replaced with a "scoop" to allow the new cowling's longerml tabs to held by the fuselage halves by this recess when connected. Blunderbuss2 noted last time it must "poetic toy maker license" to have a top mounted scoop behind the cowling, because radials have up-draft carbs. I think it's amazing he spotted this. It turns out, sly Blunderbuss2, that the original 495 didn't have this scoop! Evidently there was a problem with the first upper cowling mount letting the cowl to fall off under heavy playing(meaning me as a kid). So Blunderbuss2 it seems this "scoop" is a deeper recess for the tabs on the new style cowling to make it more secure. BB2, I am amazed you noticed this from a technical aspect and it turns out to be a Hubley redesign. I would have put the wrong version on my project, your sharp eye caused me research this. Kudos!
The canopies and props by themselves are costly. I've got two more planes with both I'm watching. Hopefully I can get them cheap enough, I'll have enough parts to make 3 different complete 495's and a bonus Flying Circus P-40 for just a little more than the cost of canopy/prop replacent parts.
Thanks,
Bill