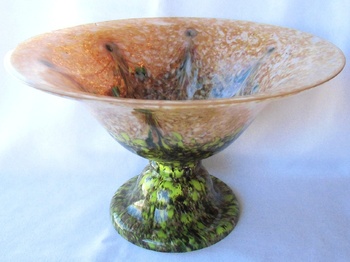 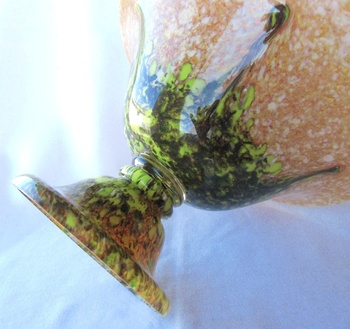 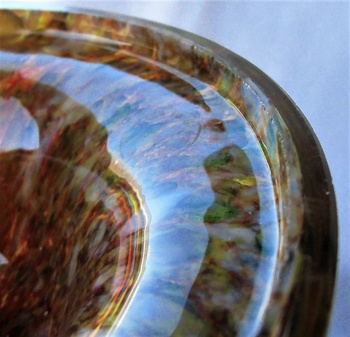 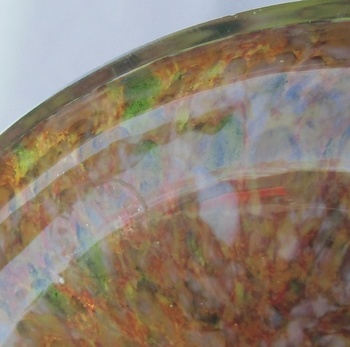 One of my favorite Art glass pieces, a large table center piece bowl or compote, with a 10 inches wide diameter at the upper rim, multiple layers of glass applications with a double spatter decor, what I call a fine wheat speckled glass and a green, dark yellow and green aventurine spatter in the Ruckl 'shimmy' style of five flaming projections from the base surface.

It is marked with a faint gold circle with the words MADE IN CZECHOSLOVAKIA inside it. This is a rare type of Ruckl decor, it was produced in orange, red, cobalt blue and green, all combined with the wheat speckled glass.

I had been asked to provide this post months ago, when I posted a new blue and wheat coupe vase. There was a group image of my other pieces. How do I identify this decor and shape as Ruckl? By studying many Czech interwar glass pieces, where the shape matches other more common Ruckl decors.

Recently I learned that Jiri Ruckl who ran the Ruckl Crystal businesses since 1992, died in September 2017 at the age of 77. He was the great grand son of the first Ruckl glass works owner in Nizbor, Anton Ruckl. His obituary is an impressive biography of his many accomplishments, his studies and experience in many fields, his standing as a retired Senator, and his great commitment to his family, his employees, his country and his family. His is a name that is highly admired and respected in Czechnia. He visited with Deborah Truitt at her home in the USA, during the summer of 2015.

There is a need to explain that the tradition in Bohemia, was to have large families, as many infants died before 1900, and the surviving sons would inherit a portion of the assets the father had established during his lifetime. This causes confusion for us collectors of the 21st century, as we are not always sure which branch produced what. Some siblings ran their own share, and others decided to amalgamate it all, for one son to run, as they were bought out.