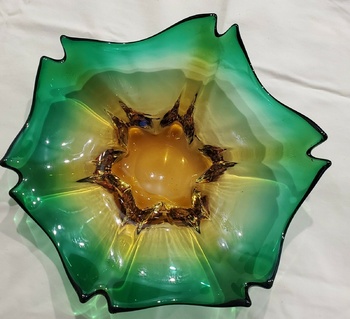 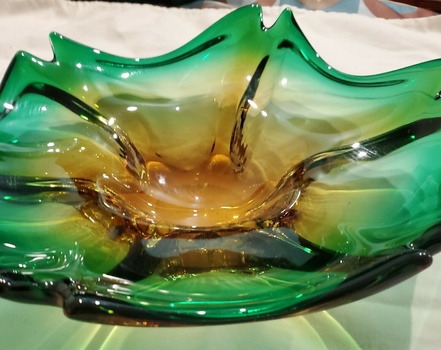 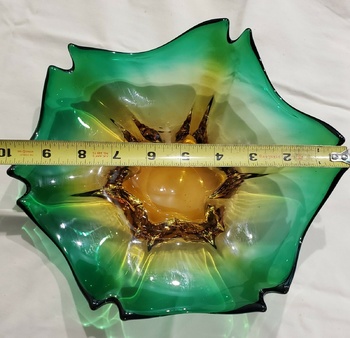 This was love at first site, the glass colors are wonderful, but my impression is this is a recent glass product, not that it matters. I saw another similar one in a red glass combination.

-------------------------------------------------------------
jan30th.
With attribution comes much information, labels, and background stories. From the glass messages site discussion in 2007, some comment excerpts about this producer/importer.
" I am happy to hear that Jordan's Importing Company is finally getting the recognition it deserves. Many times I see my father's work attributed to other artists of that time because they do not know the maker.
My father, Jack Blanco designed all of the glass. He had a partner, Spartaco Colelli in Venice who took care of the manufacturing.
My father opened a beautiful showroom on the corner of 23rd Street and Fifth Avenue. He hired a decorator and had a cocktail party to show the new designer glass. The showroom was all glass with windows on two sides. It was magnificent. We had never seen anything like it. My father had exceptional taste and was always before his time."
"I might have some second hand info on this...
I recently bought 1 piece, that is clearly Alfredo Barbini, and it has the J.I. Co. label.
it is a very nice Black, White and Gold Seashell (which I collect) and is clearly Barbini, so I think the J.I. Co. imported pieces from Barbini as well. I dont think that ALL the pieces were designed by the owner like the daughter says. im sure most pieces were in fact made by his partner, but they also imported pieces from Fratelli Toso, and now Barbini (specially from that shell I got)."
"This is good to hear. I recently saw a bowl that I had considered to be Fratelli Toso with a JI Co label on it. I sold a couple of these bowls a few months ago, so I was concerned when I saw the gondola label on one of them. I am still concerned that I misattributed the bowls -- something I don't like to do, but unfortunately have done a few times."

My conclusion is that often even direct family members don't know the whole story, basing conclusions on what they believe the facts are is just as questionable, unless there is a complete piece of documentation included. Museums are also good sources, if they keep accurate records of their pieces such as the Victoria & Albert Museum in London.

The TV show Antique Roadshow had many situations that they broadcasted, when pieces were traditionally handed down from generation to generation with a good story which turned out to be false. I don't think the purpose of the family information was meant to deceive, but reflected an irresistable urge to embellish over time for the younger family member's enjoyment.