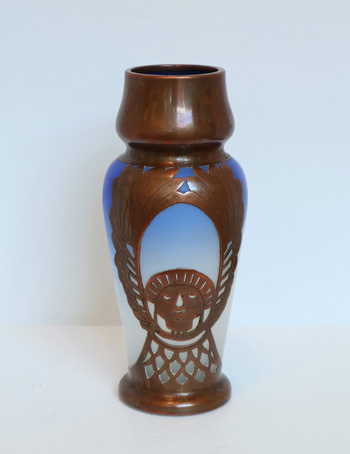 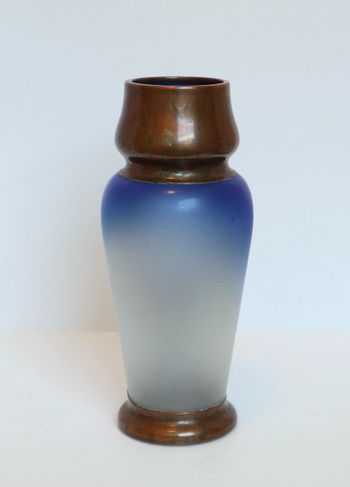 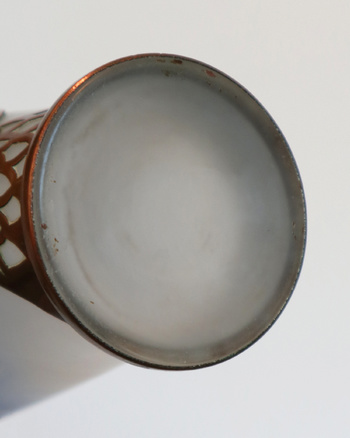 This Fritz Heckert vase is quite different from what people typically think of as Heckert (usually pieces with fine enameling, or iridescent pieces like Changeant). The glass is a beautiful frosted deep blue that fades to clear towards the base, and has a copper overlay. The copper is quite thick and hand cut in what I believe is either an Egyptian-style sphinx or winged pharaoh (thanks Penny!). In some other examples I have seen I can see more of a lion's face, so I am not quite sure which, but I can clearly see a face and wings. Interestingly, I have seen this vase with the same color and overlay pattern but with a brass rather than copper overlay. I prefer the copper and its lovely patina. It stands 6-1/2" (16.5cm) tall; I believe this vase dates to about 1900.

Edited to add: Even though an almost identical vase is shown and identified as being an Otto Thamm design for Fritz Heckert in Stefania Zelasko's book 'Fritz Heckert Kunstglas Industrie 1866-1923', I have received feedback from several well regarded collectors that they do not believe this vase is a Heckert piece. After doing considerable searches I have been unable to find hardly any other Heckert pieces with copper overlays, or in this shape and decor, so I am changing the Heckert designation to a question mark for now.