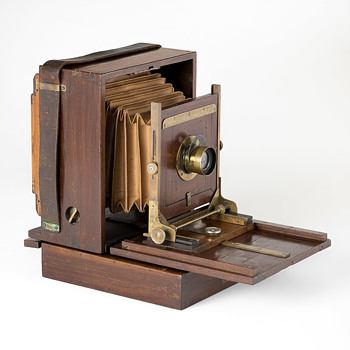 Happy holidays (soon) to everyone! I thought to end an unusual year with an extremely rare and fascinating camera.

As I’ve said in past posts: I love quirky camera designs that also contributed to the overall history of more successful concepts. In a couple cases, 19th century builders working independently from big manufacturers made the greatest innovations. For instance, CGH Kinnear and Frank Pearsall are two individuals who put forth original ideas and designs that were adopted and copied by major companies deep into the 20th century. Yet these pioneering builders remain relatively anonymous because total production was incredibly small and their cameras were often lost/trashed or simply remain undiscovered. (In the case of Gibbs, only three cameras are known.) And as a result of this obscurity, the apparatus is rarely understood and documented beyond their patents.

Even though I don’t normally collect more than one example of a camera, this Gibbs is unique enough to be an exception. Given its oddball design and rarity, I jumped at the opportunity to acquire this camera when it became available. While similar to the other Gibbs in my collection (and posted here on CW), it has enough differences to make it worthwhile to own. It is definitely different than anything made before or after it.

William C. Gibbs is a builder that is unknown to most of the collector community. He lived in Oakland, California which was a long way from the epicenter of American camera manufacturing in Rochester, NY. His big contribution was documenting a build philosophy for what became known as “self-casing” cameras. In his December 1888 patent, Gibbs was the first to describe a “self-contained” camera; meaning a camera that folded into its own case to protect delicate parts. Pearsall (1883) tried it first and then Gibbs.

In July of 1888 (five months before patent approval), Gibbs showed his camera to the Pacific Coast Amateur Photographic Association. The self-casing concept was hyped per the meeting records: “A sample of the Gibbs Camera, now being made under the direction of our worthy ex-president, was shown. It meets the long felt want of a camera that is its own case, is compact, and yet carries the lens in place, has no loose parts, or annoying projections.”

But the vision eventually became popular when George Eastman introduced the 1890 Folding Kodak. It was a better “mouse-trap” so to speak and the self-casing concept became a huge hit throughout the 1890s and early 1900s.

These Gibbs cameras are among the most interesting in my collection. And to be honest, it’s a really cool design. Similar to the already posted Gibbs 5 x 7 inch format camera, this ½-plate version (4¼ x 6 ½ inch format) is also heavily constructed with hand-cut dove-tailed joints, leather bellows, and brass hardware. The key feature identifying Gibbs cameras is a rear body cover that rotates 270 degrees to become a solid platform to support the drop-bed.

I have carefully looked at both cameras trying to determine which might have been built first. Taking into consideration design and construction details, features (etc.), I cannot figure out which is earlier. However, unlike my other camera, this example does not have a maker’s label with patent designation. As such (to speculate), maybe this camera was the pre-patent model shown at the July 1888 Photographic Association meeting.

As background, Gibbs was also a photographer who used his own camera to shoot pictures of the solar eclipse of January 1, 1889. In a letter published in a report by the Regents of the University of California, William Gibbs wrote about his observations and mentioned having successfully exposed two plates that would be given to the Lick Observatory.