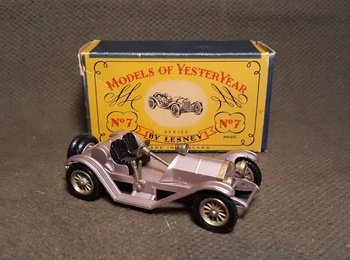 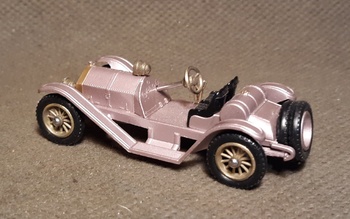 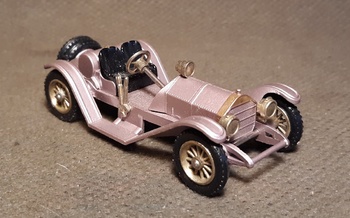 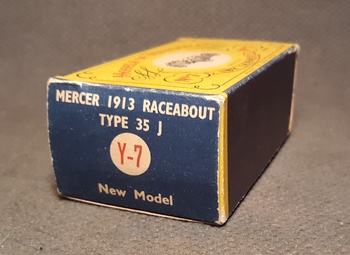 This is my second version of this model, the other is the more common yellow version. This one is the first issue version released in 1961. It helps that it says "new Model" on the end flaps. Now for our Matchbox history.
First released in 1961 the model was sold through 1967. From 1961 through 1965 it came in this mauve color which apparently means light purple. It also came in silver plate bolted to a pen and pencil set or some such. In 1966 and 1967 it was in yellow which was the original color of the actual vehicle. Despite only being sold in yellow for two years those are more common as Matchbox sales were increasing exponentially.
The box is a C type. The C type was the first to have the name of the model on the end flap. The next type had an improved image of the model and the white circle was removed so it was an all yellow background.
Now for the actual model there was the real one in the basement of the Petersen Automotive Museum that I saw a few years back. As that is also a 1913 Raceabout Model 35 and it is yellow I believe it is what the model was based on. It was quite exciting to see the original. But the guide talked about it for quite a long time. I think it may have been 10 minutes. There were hundreds of cars and we walk by others at about 60 mph, there is 1956 Chevy Belair owned by Steve McQueen and there is a George Barris monstrosity (yes he said that). Anyway I always recall that when I see this model. 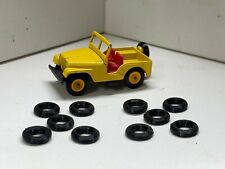 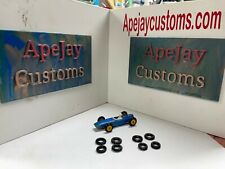 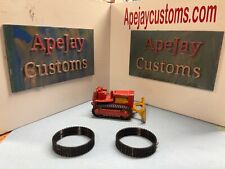