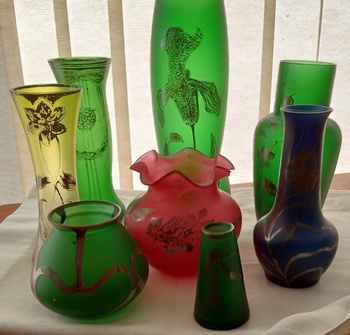 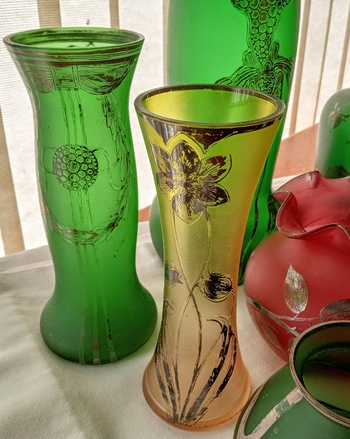 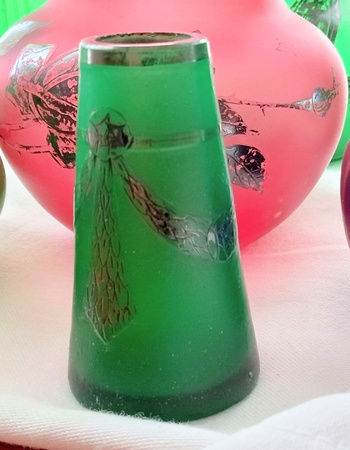 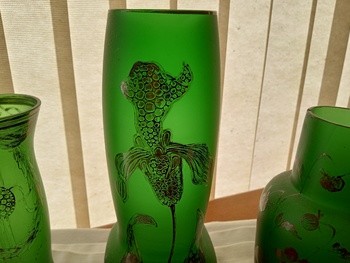 Acquired in recent months, 5 new pieces for my Goldberg glass grouping, 4 green ones and a cranberry. The smallest one was a surprise as it seems to be a short hat pin holder. The largest one is reminiscent of Stolzle with squared rounded and dimpled base at 10 inches high.

This type of glass was the first of the Bohemian pieces I discovered 8 years ago which had an intense vibrant green shade and silver deposit on an etched floral Nouveau decor, at a time when I was focused on silver decorated ceramic European decorative items.

Later on, I learned that many glass items made during early 20th used this forest green color, cranberry, golden amber and dark cobalt with a mat or satin finish. The firm of Stolzle in their North Bohemia glass plant were also documented as producing these types of mat decorative glass items in the same colors, before WWI.

Stolzle is especially known for their Art Deco pressed glass lines, with lovely soft glass colors and great designs. After WWI when the Austria-Hungary Empire was re-disposed in separate entities, and Stolzle in Vienna, which has 7 plants in the vast region of this empire had to re=organize their glass production.

There is a 2 year old post here that I created about the Suchental hot molded glass plant in Bohemia, based on a document and image of one of their prize winning glass vases.
https://www.collectorsweekly.com/stories/285201-an-obscure-bohemia-glass-plant-in-suchen

Also an old post with more information about Stolzle glass identification, Kralik being considered instead, I still think Stolzle was the initial designer and it is very possible Kralik followed suit as they did many times with all the successful glass companies during this time period.
https://www.collectorsweekly.com/stories/55943-stoelzle-vase--amended-to-kralik