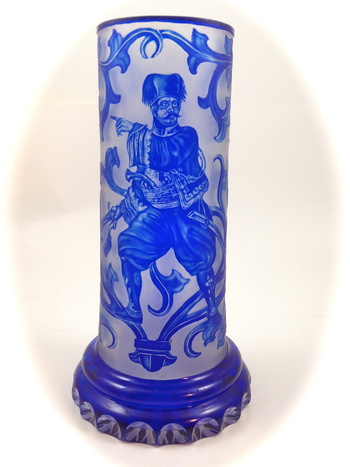 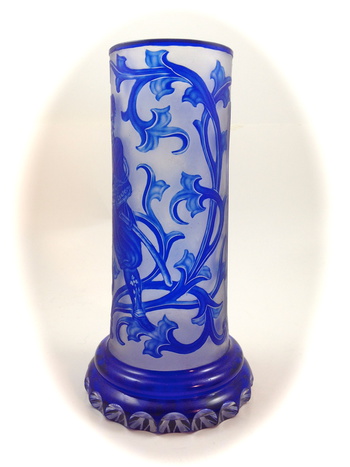 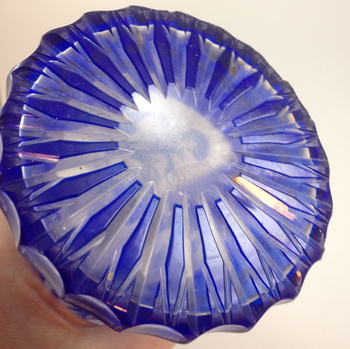 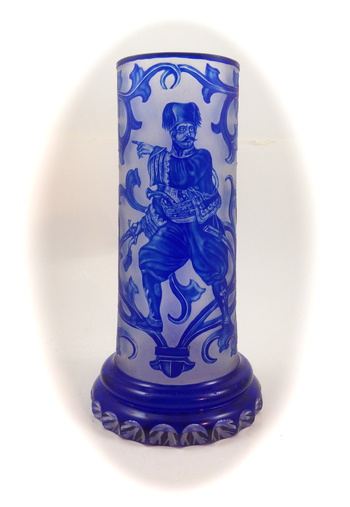 The first thing you may notice about this striking vessel is that despite my title, it has no lid. An April Fool's joke? I'll come back to that in a minute.

In researching this piece, I had to make extensive use of Google translate, because any literature covering this type of glass is written in German. With good reason, too - as the piece is almost certainly German (Munich), dating to the early third quarter of the 19th century.

This glass is about 7.5" tall (about 19 cm), clear, matte finish, with cobalt blue overlay, hand engraved to form the image and surrounding scrolls. The image itself is curious - to me, it appears to be the Russian Tsar Alexander II wearing the uniform of a Cossack? If anyone has any further insights into the image, I welcome them. Beautifully executed wheel cutting, including on the base, where there is a perfectly ground and polished pontil.

All is not perfectly well with this piece, though. As I alluded to earlier, this "humpen" (tankard) is missing its "Deckel" (lid). With good reason, too, for on the side you don't see, there are a couple of nasty scars where the henkel (handle) was broken off. The (metal) lid would have been attached to the top of the handle with a hinge that allowed the lid to open and close perfectly flat on the surface of the glass. Intact examples in Das Boehmisches Glas, Band III show that the handle most likely would have been made of clear glass with a ribbon of cobalt blue inside. The good news is that this piece only cost me about the price of a nice lunch. I see this as a rescue operation - why let such an important piece languish in the jewelry case of a country antiques store?

As to the question of who made it - there are a couple of possibilities. A lot of this type of work was done by Franz de Paula Zach in Munich, although his works seem to be mostly signed, and this piece is not. However, this piece is stylistically similar to his work. Another possibility is Ludwig Schmitzberger, Grafenau. PMC III shows a pair of glass portraits engraved in the same way as this piece, and the portraits are of... Tsar Alexander II and and his wife, Maria Alexandrovna.

Again, google translate has been my friend, but it is not a perfect one. If anyone else has any observations or insights about this piece, I would be most grateful if you share them here.