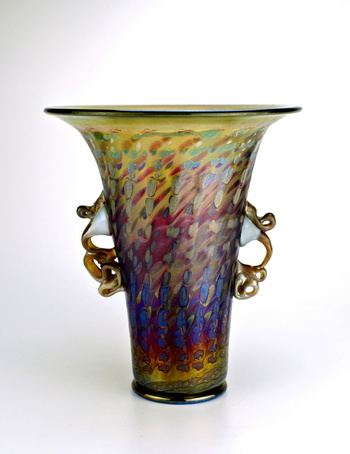 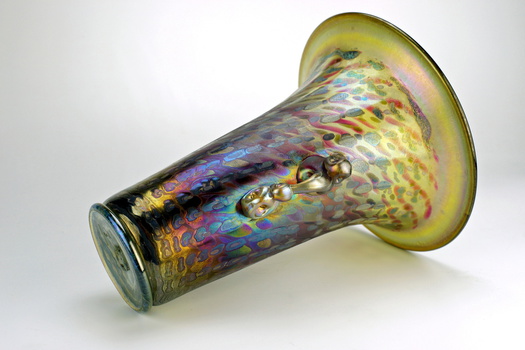 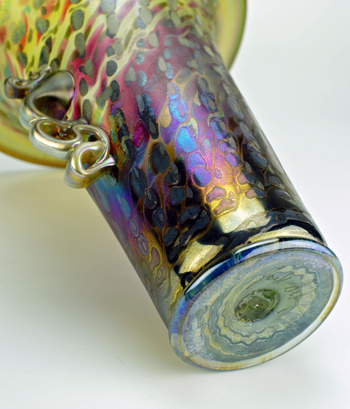 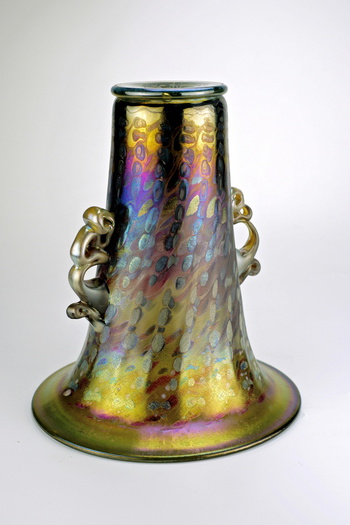 Jack Ink is a former Littleton student who moved abroad and is now living in Vienna Austria since 1975. He along with the well known glasshouse Lobmeyer opened a factory in Baden where he produced this vase, circa 1980. The factory was later sold in 1989. His art is in several museums including the Corning and on display at Lobymeyer. His work is better know in Europe and on rare occasions sold thru major auctions houses.

The oil spotting and strong iridescence drew me to this vase. The dealer didn't know what it was. He had misread the signature and labelled it incorrectly. On our trip to Vienna, I remembered seeing Ink's work in a shop window. The neighborhood around Lobmeyers store is loaded with high end dealers and a similar vase was on display in a shop window.

This piece is in as made condition and stands 10.75" tall by 9.5 wide...its huge in person. The area at the handles that appear white/grey are a factor of reflection of my lighting and how the glass turns more opaque in its folds. There are no repairs or restorations.

Ink was honored with the Bavarian Government Award and the International renowned Coburg Award and is founder of the Studio Glass Group Austria , heading the Glass Studio Franzensbad.

A book of his work was published in 1990 with text by Ulrich Pietsch and Harvey Littleton.

The composition of Ink's glass has been analyzed and compared to that by Loetz and Tiffany here....an interesting read.
http://link.springer.com/article/10.1007%2Fs006040070085?LI=true

Additional photos of this vase and other works by Ink can be seen here: